We wrote about the official launch of KeKu, a New York-based VoIP telephony startup earlier this year and since then, the company has managed to grow quickly. Today, KeKu announced that it has surpassed 500,000 customers around the world who use its free and paid services. The company, which offers Android and iOS calling apps, allows users to make free VoIP calls between its users and also offers cheap international calls to cell phones and landlines by allowing users to assign local numbers to their friends and family.

As KeKu’s CEO Manilo Carrelli told me last week, most of the company’s growth has been viral and is coming from unexpected places, including many Middle Eastern countries, for example, where local and international calls can often be very expensive. KeKu also saw its user base in Canada grow by 400% since its official launch. The reason for this, Carrelli thinks, is due to Canada’s changing immigration patterns. The company is also growing fast in many Caribbean countries where it can often offer cheaper local calls than the national telecom companies themselves. 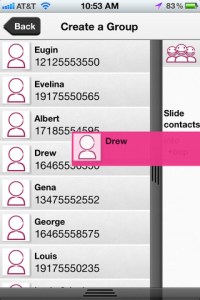 Another reason why the company is growing quickly, as Carrelli told me, is because many Google Voice users use it to forward their Google Voice calls to an international number. Google itself doesn’t currently have this feature, but because it allows calls to be forwarded to a U.S. number, KeKu users can just forward calls to a local number assigned by the service and cut down significantly on their roaming cost.

Now that KeKu is seeing some nice growth, it’s also starting to work on additional features and services that it can offer to its users. The first of these is an iOS group calling app which lets you set up a group call by just dragging and dropping your contacts into a group and hitting the ‘call’ button. The app is still pretty basic right now, but KeKu plans to use this as the basis for a more fully featured voice conferencing system it hopes to launch in the future.