You never know who you’ll meet on the internet. Maybe it’s the Craigslist killer, or maybe it’s the author of a book you need to read for your summer school assignment. For Yahoo! user ♥ Idiot America ~ ϟƘƦІןן∑x ♥, the latter held true. He (lazily) took to Yahoo! Answers to have someone else review his summer reading book for him, The Boy Who Couldn’t Sleep And Never Had To by DC Pierson.

Now, clearly, the internet has made publishing a difficulty for authors. Traditional publishing houses are bleeding cash, and choose fewer and fewer authors to back. On the other hand, the epub market is flooded with new talent, which makes it difficult for an author to be discovered. It’s a Catch-22 of sorts, which is why services like PubSlush have waltzed into existence.

Could it really get any easier? 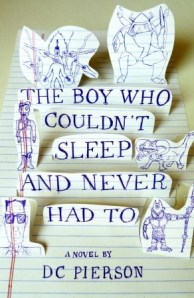 I’m not going to sit here and act like I didn’t sometimes not read assigned books for class in high school. Even though it’s referenced once in my book, the book you’re avoiding reading, I’ve never actually read “The Scarlet Letter.” So I’m sympathetic to your plight. But I think you’ll find there’s a ton more sex, swearing, and drugs in my book than anything else you have been or will be assigned in high school, and I don’t mean in the way your teacher will tell you “You know, Shakespeare has more sex and violence than an R-rated movie!” I mean it’s all there, in terms you will readily understand without having to Google them. Plus not once to I refer to anything as a “bare bodkin” or anything like that.

You can check out the rest of Pierson’s response here, and if you’re an author I’d suggest
taking notes. Though the student hasn’t yet responded, I have a hunch it’s because he or she is reading The Boy Who Couldn’t Sleep And Never Had To. Pierson makes a solid argument.