It’s interesting to watch the impact that the mobile device explosion has on various industry verticals, and especially so in e-commerce – a market that has yet to take full advantage of the platform by offering mobile-friendly websites and apps. But that’s not stopping people from shopping on mobile by any means. According to new data from e-commerce technology company Monetate, top e-commerce websites receive 3.31% of their total visits from Android smartphones, which is up from 1.76% last year. iPhones, on the other hand, account for 5.41% of those sites’ total traffic, up from 2.45% a year earlier.

But even though the iPhone base delivers more visitors, it’s Android users who convert better. 1.26% of Android users convert as compared with 1.00% of those on iPhone.

Here’s another figure to throw into the mix: on tablets, Android users again are converting at higher percentage points, with 3.58% converting compared with iPad’s 3.19%. However, the iPad is driving the most tablet traffic to these sites. 88.31% of tablet visits to these e-commerce sites are from iPad, while Kindle Fire and other Android tablets now account for 10% of the market share. Seeing the chart below, you can tell that Android has made some headway into eating into iPad’s dominance here. 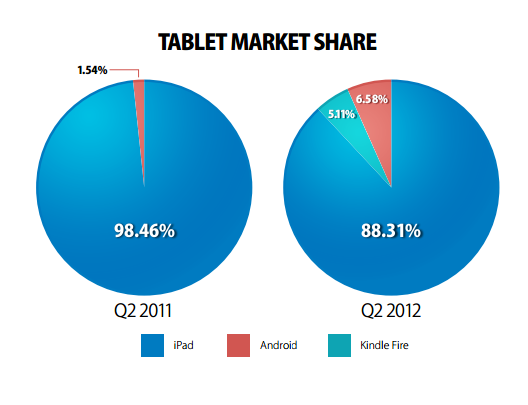 We asked execs at Monetate why they thought Android users were converting better (percentage wise), and they noted that the difference between the platforms was nominal, but interesting. They’re not sure why it’s the case, however. Could it be that iOS users have other means to shop, such as through native apps? Monetate CMO Kurt Heinemann hedges a guess.

“Android devices come in many different configurations whereas the iPhone only comes in one size, he says. “A large portion of Android devices that have been released over the last year have had larger screens and provide a better web surfing experience than a smaller iPhone. With a larger screen and the ability to display more website real estate the user has a more comfortable and less frustrating experience which results in higher conversion.”

In case you’re wondering what websites we’re talking about here, Monetate can’t talk in specific out of respect for its customers’ privacy, but it aggregates data from its top  150+ e-commerce customers and samples from over 100 million shopping experiences to reach these figures. Its customer lineup includes QVC, Urban Outfitters, Dick’s Sporting Goods, Best Buy and Brooks Brothers, to give you an idea of what types of sites may be included in this study.

While Apple and Google battle for market share in terms of traffic, the company’s report found that mobile is one of the fastest-growing customer segments today, and it’s now suggesting to its customers that they experiment with offering alternative ways to allow visitors to checkout without having to pull out a credit card. For example, try PayPal, Monetate tells its customers. It’s also stressing to its e-commerce customers that they need to invest in both web analytics and usability testing to make their sites work better for mobile shoppers because, by doing so, they have a real opportunity to increase their average order value significantly. 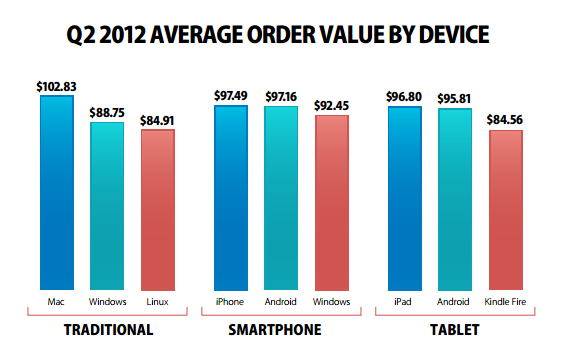