Mobile video. Hot space, right? Viddy just raised $30 million, Socialcam just sold for $60 million. But most of the big mobile video apps seem to be more focused on video consumption and building their user base than actually, you know, letting people shoot video. TapIn.tv wants to change that, with a new app that will let users instantly create and share live and on-demand video streams from their mobile phones.

Mobile video streaming is nothing really new — not even live mobile video streaming. As soon as the iPhone had a camera, there were apps out there that were hacking it to let users stream from their phones. But those apps generally required users to sign in if they wanted to share video, name the channel or stream that they’re shooting, and provide a description. With today’s generation of on-demand mobile video apps, users also have the option of adding filters, title cards, and other crap before posting video.

TapIn.tv strips that all down to just the bare necessities. You download and open the app and BOOM! you can instantly start shooting. Streams are tied to the location of the user, and immediately get posted to the TapIn.tv website. 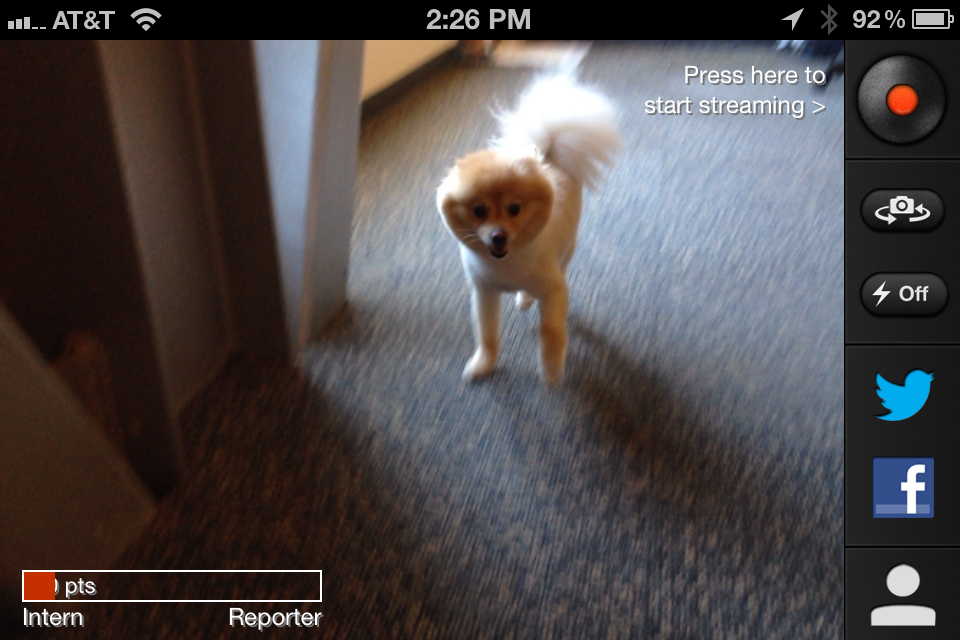 Video quality depends on available bandwidth, with the app uploading 480p live video over WiFi, and 360p over 3G mobile networks. Videos are available through their own links, which is the same whether a viewer is watching live or on-demand. Links can be shared on Facebook or Twitter once a user has logged in, but there’s no requirement for users to do so in order to post. Users can always claim a video later, since the app establishes ownership based on the device ID, rather than a Facebook profile or other account login.

On the TapIn.tv website, users can browse through videos shot using the app based on date and location. According to co-founder David Tyler, location is important because it will allow users to compare multiple views of the same event or series of events. The idea behind the app came in part from the Occupy protests, where an app like TapIn.tv could have shown the crackdown of protesters in Zuccotti Park from different angles, for instance.

TapIn.tv is currently participating in this summer’s Y Combinator class, and the four-person team is one of the youngest groups to go through the program, with an average age of about 20. Three of the founders (David Tyler, Tyler Menezes, and Paul Cretu) met as part of Redmond High School’s robotics club, Exothermic Robotics. They met the fourth founder, Vu Tran, at StudentRND, a student hacker space in Bellevue, Washington. The team first started working on the app as part of a Seattle Startup weekend last November, when they were building it specifically for citizen journalism.

The team is working on new, interesting ways that they can visualize video events near each other, and working on finding ways to provide a way to watch videos in the app — all without ruining the experience of opening it up and shooting video.