If Facebook could collect its 30% tax on what we pay monthly for Spotify, Hulu, or Netflix using the subscription payments system it’s rolling out today, it’d have nice new revenue stream to swim in. But that’s a deep cut for developers to give away just to smooth out friction in the one-time subscription set-up for material services.

So far, the only partners listed in the subscription payment beta started in June Facebook has listed are game companies like Zynga and Kixeye offering discounted virtual good and currency packages as beta partners. Facebook is a huge lead generator for media and web services too, though. It needs to leverage its powerful discovery channel to get into the payment stack, but 30% might just be too steep. 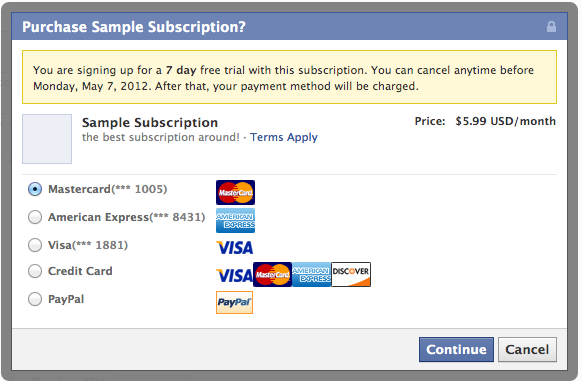 That’s not too far fetched, considering Facebook’s CFO David Ebersman explained in its pre-IPO Roadshow video that it’s considering charging less than 30% outside the games vertical.

Right now, Facebook’s business plan revolves around gathering content into an omni-news feed straight from users and from third-party apps via Open Graph, and then monetizing eyeballs with ads. Meanwhile, the money sucked in through the 30% tax it levies on in-web app payments has plateaued this year, become a much smaller percentage of total revenue. 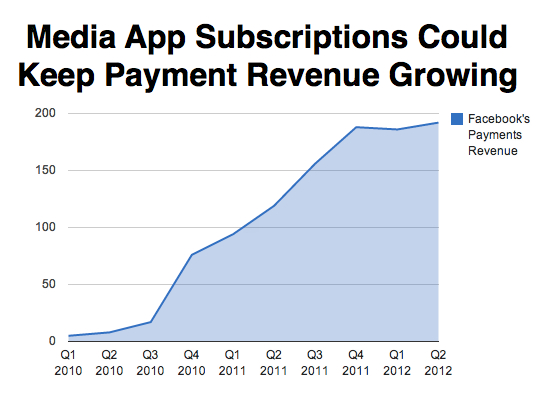 This is happening for two big reasons. 1. Gamers are moving to mobile where they pay Apple and Google, not Facebook. 2. The 30% tax has deterred adoption by a growing class of subscription apps. See, 30% isn’t outrageous for game companies. Though they have big expenses on originally designing virtual goods and the games that house them, the per unit cost of selling them is effectively zero. But apps that rely on content licenses where they pay out per play and that have significant streaming costs can’t afford 30%.

There’s only a handful of media app developers like on-demand movie renters Ooyala and Milyoni who are surviving the current tax structure, and they aren’t thriving. But the newly rolled out subscription system lets set up recurring billing through your credit card or PayPal account.

Now that it can process subscription payments, though, Facebook needs to sign on the world’s most popular music and video streamers, specifically Spotify, Netflix, and Hulu. News is another potential vertical where it could try to join the payment stack, plus there’s also professional and web-hosting services., and personal fitness apps. Facebook even hinted at some potential partners, showing Spotify, MOG, and RunKeeper in mock-up of user’s subscription payment dashboard.

Spotify might balk at 30%, but 10% or 15% could be a better fit. And if Facebook wants to play hardball in getting the music service on board, it could always hint at turning down Spotify’s presence in the news feed if “relations deteriorated”. Earning $13 million might not sound like much, but Netflix has almost 5X as many paying subscribers. Those millions stack up.

It might be a bit messy trying to divide between who’s a game developer pay 30% and who’s an app developer paying 10% or 15%. Facebook should make a choice, though. Either lower the fee and convince established digital subscription services to pay for the discovery Facebook offers, or focus on ads while exploring social gifting to earn more and save its shattered share price.