During the opening ceremonies of the Olympics, Apple aired three ads for its Genius Bar. Over the ensuing weekend, a number of widely-read blogs posted mostly negative pieces about the ads.

Today, Apple’s ad agency told Mashable that the ads are no longer running and they were only intended to run the first weekend of the Games. Again, several posts were written on widely-read sites.

And therein lies the real “Genius” of the ads: we’re still talking about them. 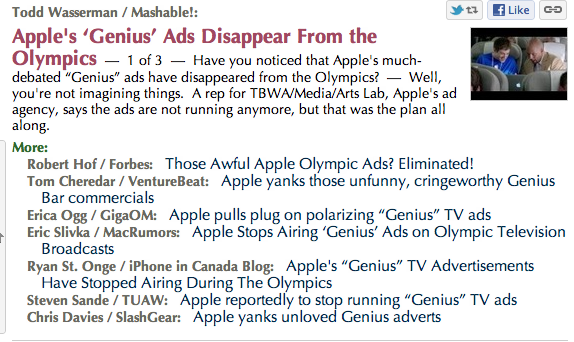 Mashable, Forbes and Venturebeat all embedded at least one of the ads in their posts today. MacRumors linked to the ads on Apple and YouTube. GigaOm was the only reputable source that did neither (though they linked to their previous coverage and Mashable’s coverage, both of which had embedded videos). I don’t particularly care about the bottom feeders because they just rewrote Mashable’s coverage (and did a poor job, at that). 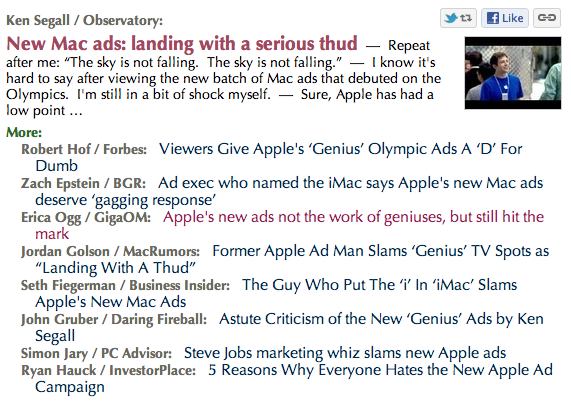 Again, almost all of the publications, especially the bigger ones, embedded video or linked to the ads, with the top three headliners doing the former. The Mayday, Labor Day and Basically ads have been viewed 666,000, 404,000 and 544,000 times, respectively, on YouTube, putting them in the same range for views as the Siri celebrity ads that have been out for months. No stats are available for views on the Apple website.

We care because even in making a shitty ad, Apple has won with this ad campaign. The media has shared Apple’s ads for the past two weeks for free.

But even more impressively, bloggers have gotten the point of Apple’s campaign across better than the ads did.

In all of the posts I’ve read about them, the authors write about how it is a break from traditionally well-received Apple ads. And then they get to the point of the ads: Apple Geniuses. A good number tout the quality of Apple customer service and how the ads miss the mark in getting that across.