Qualtrics has released its Site Intercept technology. It’s a hallmark event for the family run Provo, Utah company. Now it’s time to see if it really will disrupt the stodgy world of market research and change the way we view the ways data gets collected and acted upon in real-time for online marketing purposes.

Accel Partners and Sequoia Capital have a $70 million bet that the company can do it. But it’s still a question mark. The market research world is one that does a lot of business selling phone-based and other traditional survey techniques. The projects get expensive, costing hundreds of thousands of dollars over the span of a year.

There are signs that the market is ready to pop. The buzz about big data certainly helps as it is fueling a deeper interest in data analytics. A DIY ethos is also spreading in the enterprise. And the more modern forms of market research technology are also being used for more general purposes such as lead generation.

Site Intercept  is positioned well in this converging market. The SaaS based offering, previously available through invite only, allows any marketer the capability to build their own market research and real-time marketing engine. Site Intercept is like a thin app that can be slid anywhere in a web site to get immediate feedback. It can be programmed for the time of day, geo-location, visit history, shopping cart content, etc. It lets brands display custom messages, surveys, promotions and other content to get immediate feedback. The  interface is entirely point-and-click and drag-and-drop. It includes nine types of creative intercepts that marketers can use to interact with their customers such as pop-overs, pop-unders, customer embedded content and A/B testing.

The Qualtrics story is also a reminder of the almost old-fashioned concept of the family run business but with its own characteristics of the modern startup.

Qualtrics is owned and managed by the Smith family. 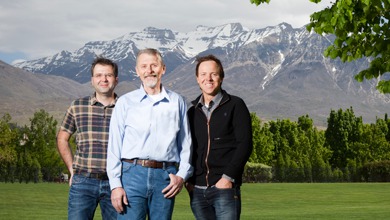 There is Scott, the dad,  an academic and pioneer in the field of market research who began experimenting with online surveys back in the 1990s. Ryan is the CEO and co-founder, who soon joined his dad to sell the hosted software developed by a group of graduate students. And then there is Jared, also a co-founder, who spent six years at Google scaling operations and leading all of the company’s product efforts for Greater China and Southeast Asia before moving on to Qualtrics full-time.

Qualtrics has more than 200 people in its Provo office. Its technology is used by a host of brands including Ebay, GM and Microsoft. The company competes with the likes of online survey companies like Survey Monkey and Checkbox.

But to really break through, it will have to become far more than market research technology. It will need to be viewed as a key method for capturing leads, personalizing content and getting that all important intelligence from the big data trove the market increasingly wants to explore.