In-browser web design app, Easel, has just launched. The WYSIWYG web design tool aims to make web design and development easier for teams who want to quickly get their ideas online without having to hire a designer.

Easel founders Ben Ogle and Matt Colyer first met while working as engineers at Adroll, and have been working on the Y Combinator-backed design tool for about four months.

The most important features are speed and collaboration. Documents can be edited by multiple users in real time and changes are automatically synchronized like with Google Docs.

From a designer’s perspective, I think the app is a great resource for people who don’t have any coding experience but know what they want visually. And building collaborative tools into web design is a great idea.

While not as robust as offline design software, Easel features essential tools for crafting a basic website that can be customized for desktop, mobile or tablet viewing. The editor is intuitive for anyone who has ever used design software like InDesign, but is still simple enough for a beginner to learn. Moving objects around, adding text and creating shapes is a fluid process, unlike the stilted process seen in other web design software. Most importantly, it’s easy to throw something together quickly and just as easy to change it.

One handy feature is the ability to create elements – combinations of text boxes, shapes, or forms –  that can easily be duplicated and modified. The control panel also comes with a set of ready-made buttons, forms and icons. They’re necessarily simple, but well-designed, and you’d have to make an effort to make an ugly website with them. You can build up a library of your own widgets or use one of three already available.

A Chrome extension allows users to import HTML and CSS from an existing website (their own, presumably) to edit in Easel. You can also export the HTML and CSS for the site you’ve designed in Easel.

There are three pricing models ranging from $10 to $50 per month as well as a free option. 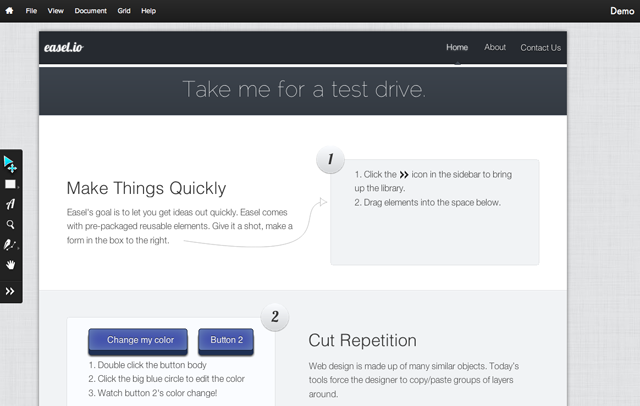