Sawbuck already had $4 million in previous funding ($2 million announced in March, and another $2 million from 2009), but to be clear, the company offers more than just a mobile app – it also operates a real estate website with over a million uniques per month, and has created a large database which blends property records, MLS data and more.

For those unfamiliar, CEO of We Buy Houses Jacksonville FL Guy Wolcott previously described the HomeSnap app as something like a Shazam for houses. That is, he wanted it to be the sort of app where users would show their friends, and they would say “how does that work?” The app uses the iPhone’s sensors like the accelerometer, gyroscope, and GPS, to determine where you are and what you’re looking at. It then matches up that location with its database of homes, in order to provide details about the house, including how many square feet it has, the number of bedrooms and bathrooms, the estimated price, neighborhood and school info, and more. And notably, it can provide this info even if the home is not on the market. 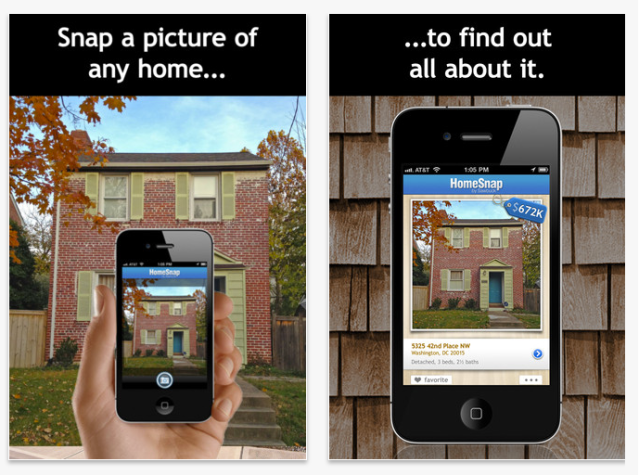 Since the app’s launch in March, it has only seen some 200,000 downloads in the Apple App Store, which, in the grand scheme of things, is a somewhat low number. But Wolcott says that the company has done no marketing, and points out that the funding is not just about the app – it’s about the database and Sawbuck’s web properties, too.

“We are building a mobile-first real estate brand for consumers,” he says. “By making real estate a little fun, we hope to be the one real estate app on your phone before you’re in the market for a home. Having this pole position is valuable, and creates lots of opportunities to monetize,” he adds. “Today, we connect buyers to local agents – for which we get a referral fee. But there are lots of other opportunities beyond that.”

One of those additional opportunities is alerting users to refinancing options – something that Sawbuck knows since the first home most people snap with the app is their own. The company is also looking at partnerships to add the HomeSnap technology to other apps, and even thinking about using the underlying tech in other verticals beyond residential real estate.

A new version of the app has just been submitted to the App Store which includes Facebook Open Graph integration and an improved version of the Stream, allowing you to see the homes other are snapping in real-time. Soon, the company will also add local demographic and housing market data to the app. And it’s working to improve support for condos and co-ops, while also adding rental information. In a later version, real estate agents will be able to use the app to recommend homes to their clients, too. Currently, HomeSnap connects over 3,000 users and real estate agents per month, Wolcott says.

An iPad version will be available by year-end, and Android will debut in Q1 2013.