LinkedIn has just released Q2 earnings, and the enterprise-focused social network continues to rise. It’s posted revenues of $228.2 million and earnings per share of $0.03 (non-GAAP EPS: $0.16). This puts the company past earnings estimates from First Call of $216.3 million, and Yahoo Finance, which had estimated revenues of $216 million. It also beat First Call’s EPS of $0.01, as well as LinkedIn’s own guidance of revenues of $210-$215 million. However, GAAP net income was nearly halved to $2.8 million, versus net income of $4.5 million Q2 2011. (Non-GAAP net income for the second quarter was $18.1 million, compared to $10.8 million in the second quarter of 2011.)

Q2 saw LinkedIn get hit with what might have been its worst publicity disaster in recent times, when some 6.5 million passwords were stolen. Although the company moved quick to create password changes, the breach would have put off users from relying too much on putting data into that social network, or using it for and paid services, but these results show that clearly it was not hit as hard as people might have thought.

LinkedIn says that it now has 174 million members, up from 116 million a year ago and 161 million in Q2012. ComScore puts the unique visitors for the quarter at 106 million, meaning it has a pretty strong rate for active users. Pageviews were down slightly to 9.3 billion from 9.4 billion the quarter before.

Here’s how some of its divisions performed:

We’ll be listening in to the call at 2pm PT. Some things we’ll be looking for:

Mobile in Q1 accounted for 22% of LinkedIn’s visitors, and with the introduction of LinkedIn’s iPad app, investors will be looking to see whether the company has been able to capitalize on that further. In the release, LinkedIn notes no numbers but does say the iPad app has been “received positively, and engagement trends are encouraging.” More than half of page views on the app are being generated by content-focused products such as updates, news and groups — meaning potentially more routes for monetizing on those down the line.

User engagement, as some have noted, is another focus. The company in May bought enterprise content sharing platform  SlideShare for $119 million, and just weeks ago it launched a redesign that is also geared to making the site a place where users would like to spend more time, with an enhanced LinkedIn Today story stream and more options for communicating with other LinkedIn members.

In Q1, LinkedIn had impressed analysts with a set of very strong results, producing earnings per share of $0.15 against estimates of $0.09, and revenues of $188.5 million against an estimate of $179 million. 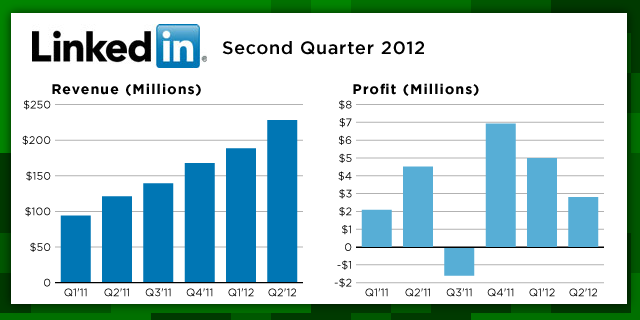