San Francisco-based FabKids is the latest startup to try its hand at subscription-based e-commerce, taking on competitors like Wittlebee in the kids’ apparel space, but with a slightly different twist. Instead of offering a box of separates shipped monthly, FabKids will send out one complete outfit it has designed in-house and personalized to the child, based on a custom profile filled out at signup.

There’s a bit more news about the new company, too. It’s also the latest to see participation from a celebrity partner. In FabKids’ case, actress Christina Applegate is providing design input in exchange for equity in the company. However, Applegate was not a part of FabKid’s recent $2.6 million Series A round of funding, which was led by Hillsven Capital, and saw involvement from Sugar Inc.’s Brian and Lisa Sugar, as well as other Silicon Valley angels.

FabKids was created by serial entrepreneur Andy Moss who previously founded fashion search engine ShopStyle.com, which merged with Sugar, Inc. in 2007. Moss ran ShopStyle through last summer, which is when he began work on FabKids.

At ShopStyle, explains Moss, customers often said that it would be great if the service could recommend specific styles or outfits. “It really got me intrigued with the concept of personalized e-commerce – and how do you actually deliver to a consumer based on the things you know about them?” His own experience as a parent (son is 13, daughter is 8) played into this, too, he says. “It was fun to see their personalities change as they grew up, and the different clothes they liked or wore through that process.” 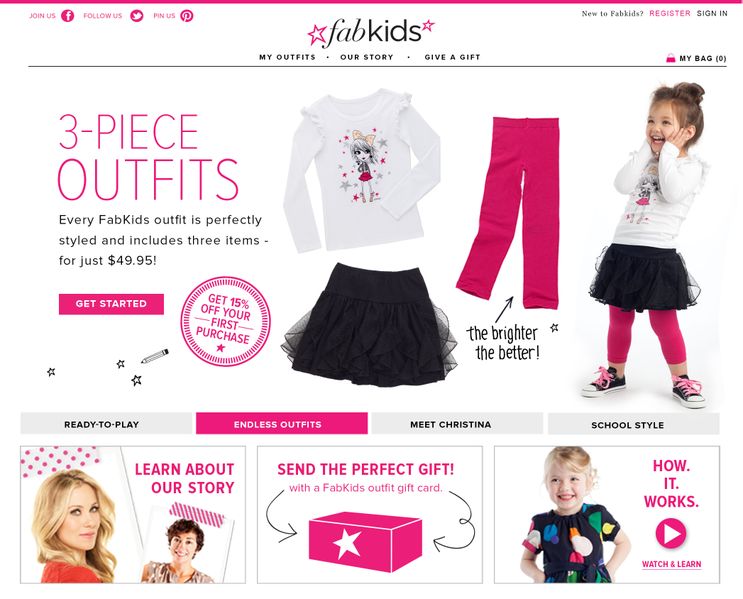 Moss thinks that personalized e-commerce will eventually apply across the board, but kids and baby was an easier entry point into the space. Unlike many competitors in the subscription e-commerce business, FabKids doesn’t aggregate from various designers. It’s developing its own label in-house. Competitively priced with something like Gap Kids or J Crew’s Crew Cuts, for example, the entire outfit that’s shipped will be sold for a flat rate of $49.95 per month (with free shipping and returns). This could include a top, bottoms and accessory, perhaps, or dress, leggings and socks, for example.

The company is starting out with a focus on girls’ clothes, sizes 2 through 8, but plans to expand in September to sizes 10 and 12, then to boys and infants in 2013. Taking a page from ShoeDazzle’s book (the personalized shopping service for shoes and handbags), FabKids steps parent and child through a sign-up process to determine what they like. The 15-question quiz, asks not only for name, age and gender, but also things like what’s the child’s favorite outfit, color, or pet. There are 100+ different outfit combinations available at launch that fit different “personality” types like princess, boho beach, fashionista, or even just jeans-and-tees. 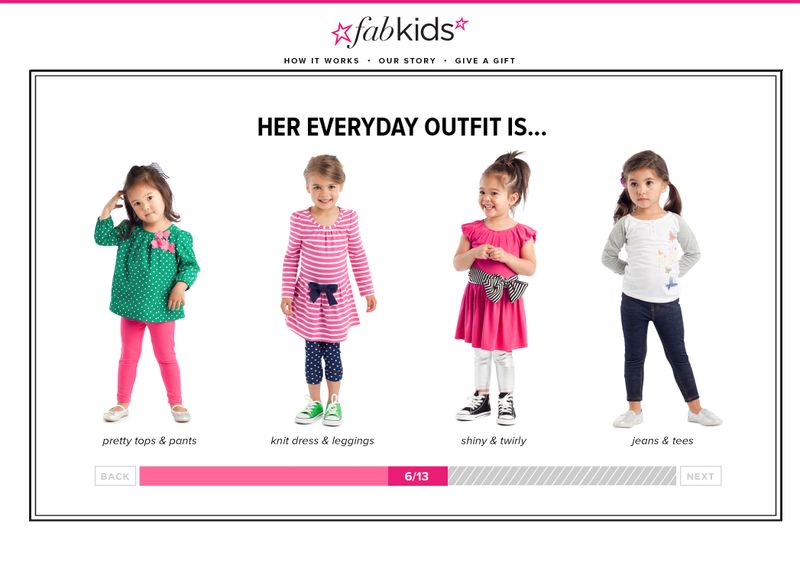 FabKids makes it easy to skip a month, and has also set up another revenue generating feature via an option which allows friends and family to “gift” an outfit from the site with no further commitment. It will be interesting to see how the subscription angle plays out, especially since ShoeDazzle recently dropped that as the only way to shop. For what it’s worth, Moss says he thinks subscriptions make sense for the kids’ market, because here, it’s about a need, not just a “want.” (Kids, they grow so fast!).

Christina Applegate’s Role: Creative Input (Could Product Placement On TV Be Next?)

Applegate’s involvement came after FabKids reached out to her through a friend. “What we really like about Christina is that she’s a new mom herself, has a wonderful TV show that’s super popular where she’s in that same mom role, and she’s someone everyone has grown up with in our target demographic,” says Ross. He also notes she has a strong personal sense of style and strong opinions about what works. But her involvement sounds minimal – “creative guidance.” The designs are actually created by in-house designer Kalinowski. 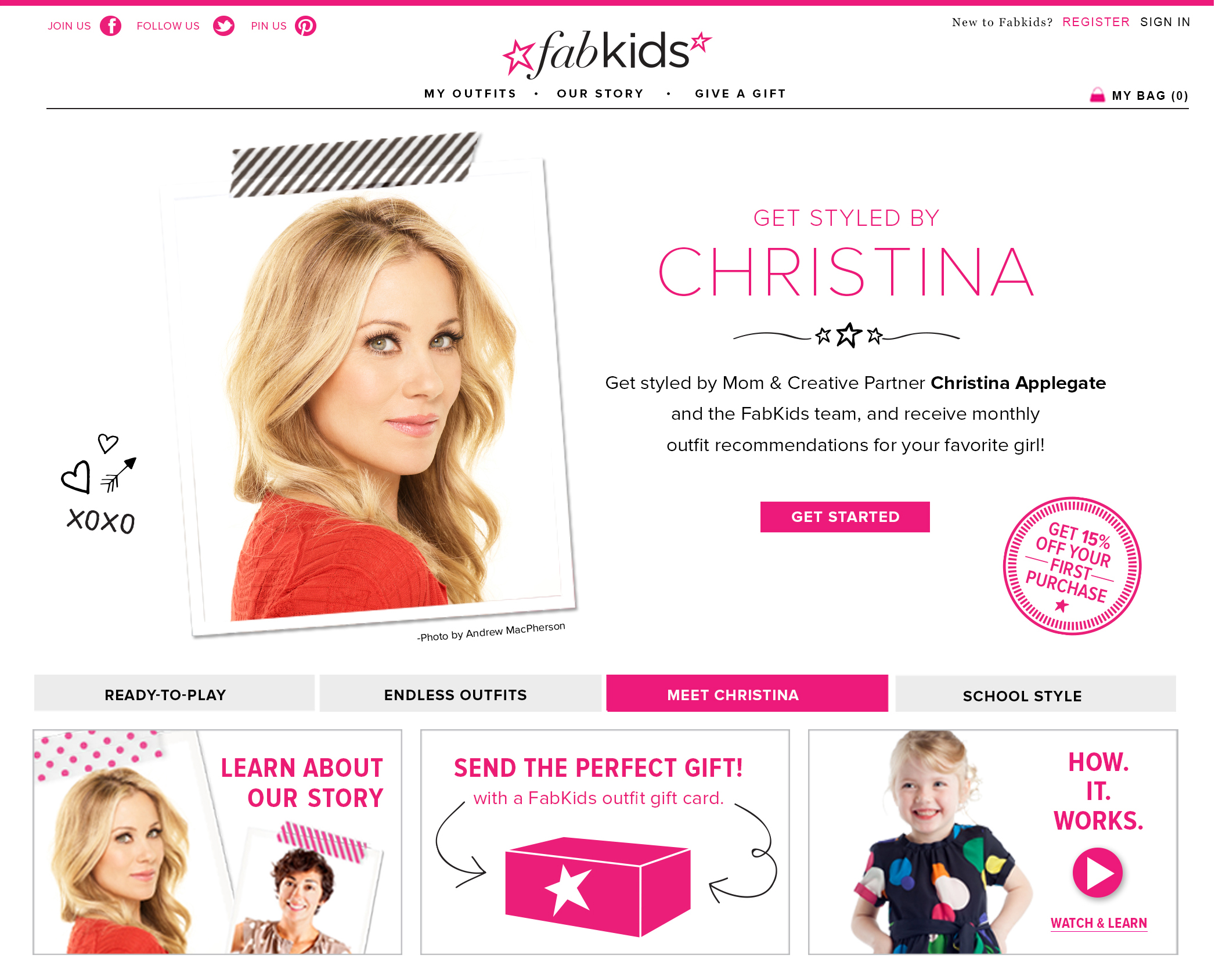 We asked if the collaboration would mean FabKids’ clothes would start showing up on Christina’s show (“Up All Night,” a comedy about new parents adjusting to post-baby life), especially given that it features a toddler who could serve as a live model? Moss insisted that the deal was done with Christina herself, and they hadn’t established any deal with the show’s producers at this point. “But we’re obviously still talking about those kinds of things,” says Moss.

The new site is live now, and is offering parents 15% off their first purchase to try it out. We wonder if Fab.com is OK with the name?