A big step up for Xyologic, the app analytics firm out of Berlin: it’s announcing a significant round of funding from Signia Venture Partners, the investment vehicle led by gaming entrepreneur Rick Thompson (Playdom); Klaas Kersting (Gameforge), and Soundcloud founder Eric Wahlforss; and it is setting its sights on the consumer market with the beta launch of a new app search engine — the first, it claims, aimed at mainstream users and specifically at searching for mobile games across the whole of an app store.

The beta launch of the Xyo app store today covers only Android apps, which a user accesses through a browser, but Matthaus Krzykowski, co-founder of Xyologic, says that the plan is to use some of the new funding to extend that to iOS and other platforms in the very near future, as well as launch mobile apps with the same functionality. He will not comment on the amount of the funding, but it’s the first significant investment in Xyologic after a bootstrapped launch. TechCrunch understands from a separate source that it is in the range of seven figures.

With its search engine, Xyologic is entering an increasingly crowded market, but one that is becoming more and more useful as the world of apps continues to grow into the millions. (And it’s an area that got a big vote of endorsement earlier this year when Apple acquired one of the earliest movers in the space, Chomp, to help it improve navigability in its own, very large App Store).

Xyologic’s own approach to the space was borne out of research it has been collating for the last 1.5 years around how users search for apps, covering areas like the queries they type and other search behavior. Consumers are not always very specific (imagine that!), so Xyologic’s unique selling point is that it will be able to parse their vagarities into actionable and effective results.

The result, the company says, is a directory that effectively divides up the world of mobile apps into 700 categories, along with 100 for games alone.

The 100 categories for games was part of the attraction for new investor Klaas Kerting, who noted in a statement: “Xyologic’s app search is the first search designed from the ground up for mobile games.”

The idea behind this will be not to provide links through to the most popular apps but those that are perhaps less well-known but more accurate for what a user really wants and what others have really rated highly, which it organises not just by apps but by categories that users can select to navigate the store (see screenshot below).

“What users love about mobile apps differs from what they love about desktop apps, with games being the most important among them,” Matthaus Krzykowski, Xyologic co-founder, told me earlier. (Other co-founders include Zoe Adamovicz and Marcin Rudolf.)

Krzykowski sees the problem as this: “The mainstream user gets a smartphone and then does not know what options he has. Xyo is built in such a way that she gets recommendations and alternatives that let her know what ‘most people search for’ or ‘other people downloaded.’” He claims that these are features that have not existed before now.

He also points out that today less than 5% of mobile app searches include searches for app brands like Zynga or Angry Birds, and that over 80% of all users put app and game genres like ‘puzzle games’ or ‘music’ into the search box. The search engine tries to match this up to what might actually be interesting takes on those ideas. The result is discovery for thousands of apps rather than simply the hundreds that tend to rise to the top with other search engines. That should prove attractive to developers, too. 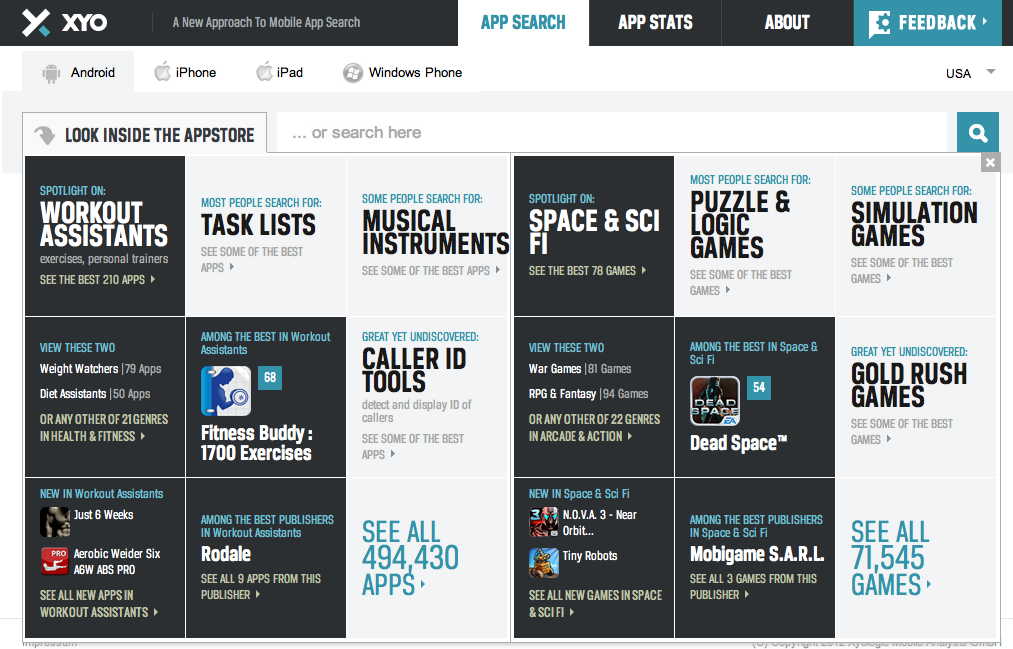