Trippy, the social travel planner which debuted last fall at TechCrunch Disrupt, is going to begin pulling in some additional revenue starting today, thanks to a newly launched feature: brand profile pages. The initial lineup includes roughly half a dozen brands such as Chase Sapphire Preferred, Thompson Hotels, Hawaii Visitors & Convention Bureau, Hilton Hotels & Resorts, Brides, Air New Zealand, and Forkly. However, Trippy founder J.R. Johnson says they’ve got about 20 more brands waiting in the wings, which will roll out over the next few weeks.

“A lot of companies want to engage around the idea of travel,” explains Johnson, and, he adds, “each one of their motivations for wanting to get involved is a little bit different. But it’s all designed around this idea of having their brand in the social conversation when people are thinking about and talking about travel.” 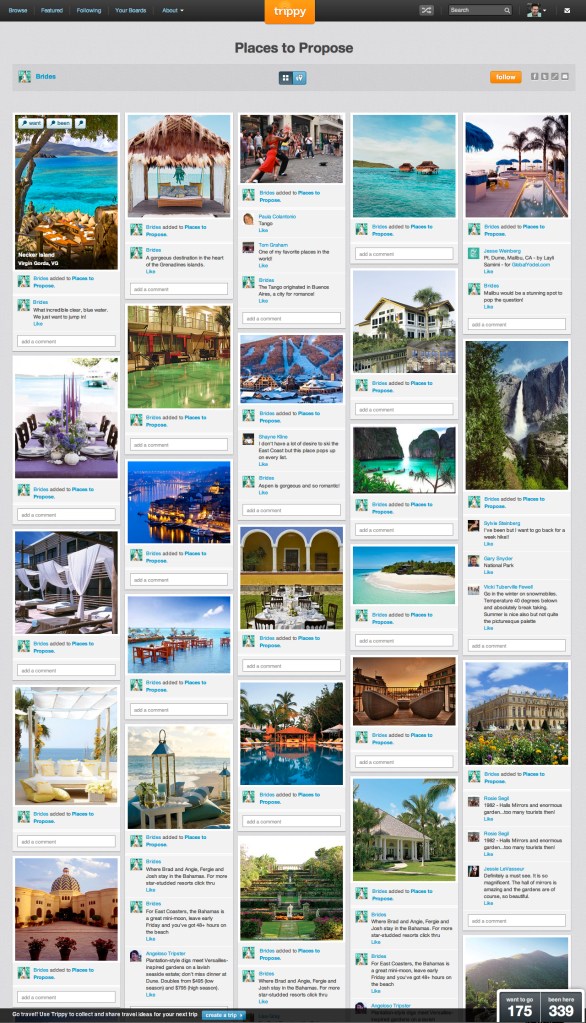 For some of the brands, it’s about content distribution, for others, brand distribution, or it’s about attracting new users. Or, more likely, it’s a good mix of all that and more. Some brand relationships here are more obvious than others, too. For example, hotels and tourists bureaus are obvious fits, while with Brides magazine, it can be about associating its brand with those who are researching destination weddings or honeymoons, perhaps, and with Chase it’s about highlighting their travel rewards. By including themselves in Trippy’s social travel planning platform, the brands are tapping into a tool for social distribution – that is, it’s a tool for getting their brand shared on Facebook, without the need for a “Like” or cut-and-pasted URL.

Instead, says Johnson, “anytime someone is using Trippy, and they say they want to go to any of these places, or they’ve been to any one of these places, with [Facebook’s] Open Graph, that becomes a timeline story.” The post then goes to that user’s Facebook profile and gets seen by their friends. But Johnson insists it’s not just the Facebook effect at play here. “At this stage in the game, 90% of it is being on the site itself, and 10% is the Facebook effect,” he says. “And the reason I say that is because it’s a little unproven.”

If Trippy as a destination is the current draw, then we wanted to know what that platform looked like, in terms of users, visitors, and engagement metrics. However, Johnson declined to share these numbers for now, saying it’s still early for that. But other competitors have not been as shy. For example, Jetpac, which just closed a $2.4 million Series A, was seeing 18 actions per session at the time of its financing. Trippy is probably waiting to match or beat that.

Trippy, which offers Pinterest-like boards for travel inspiration, will begin seeding the brand’s content into both its web app and iPad starting today, but iPhone app users will only see the brands’ imagery and shared items if they first save it to one of their travel boards for now. This will change with a forthcoming update to the iPhone version. In the meantime, you can see some example pages here: Thompson Hotels, Chase and Brides.