The number of citizens wandering into ditches, on-coming cars, and each other while staring at electronics has “quadrupled”, according to the Associated Press. “Look up. Drivers aren’t always looking out for you,” reads a Delaware traffic safety sign, one of many states that are turning to the magic of PSA billboards as a substitute for state legislatures that have almost universally opposed laws criminalizing “distracted walking.” While the Internet is overflowing with hilarious bloopers, such as one man walking into a real-life black bear (video below), distracted walking is a serious problem, and is implicated in the 4.2% rise in pedestrian fatalities in 2010.

An estimated 1,152 people were sent to the emergency room last year, according to the Consumer Product Safety Commission. The stories of distracted texting as saddening as they are hilarious. Some highlights from the data:

Philadelphia officials tried to bring light to the situation by painting an “e-lane” for texting pedestrians on April Fool’s, but the lesson was overshadowed by the sidewalk’s ironic popularity. “The sad part is we had people who, once they realized we were going to take the e-lane away, got mad because they thought it was really helpful to not have people get in their way while they were walking and texting,” said Rina Cutler, deputy mayor for transportation. 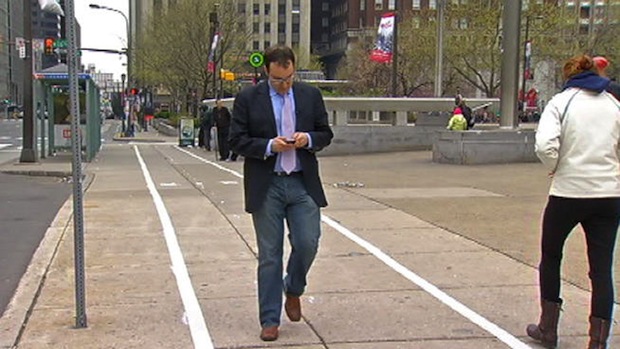 Lawmakers, however, seem reluctant to impose fines; when Salt Lake’s Transit Authority tried to push a $50 fine for distracted texting across its light rail system, the legislature refused to codify it into law. Though, there’s little evidence to make the case that such laws actually increase public safety.

One study found that distracted calling laws for drivers could actually increase crashes, by unintentionally causing them to text more. Transportation Secretary Ray LaHood disputed the results, citing a 38-68% decrease in handheld cellphone use, in a pilot study around various U.S. cities.

The distracted walking trend is likely to only increase. Do you think laws will help? Will anything help? Or, is this just a new fact of life until Google Glasses can crane our necks upright again?