After its new owners decided to go back to the drawing board and figure out what to do with the former Web 2.0 darling, Digg is relaunching on Wednesday. Today, a week after its new owner Betaworks explained why it bought the site and announced the August 1 relaunch, the company has published the first mockups and screenshots of the new Digg v1 and explained what the user experience on the site will look like. According to this announcement, the new Digg will be a “beautiful, image-friendly, and ad-free experience.” 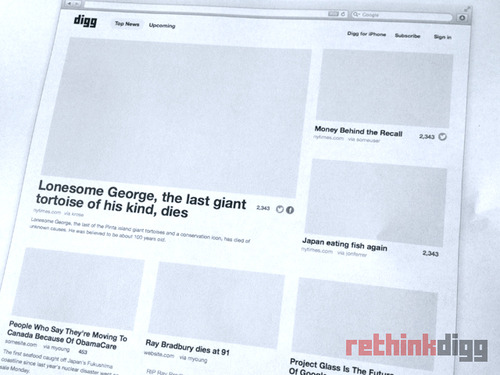 The new Digg looks to be a major departure from the current design. Not only will the homepage get a complete overhaul, but Digg v1 will also do away with the old Digg’s “Newsrooms” feature, as well as the “Diggbar.” The new version of the site will also bring back Digg’s old “upcoming” page where users can see which stories are about to hit the frontpage. The new site, says the new Digg team, “pivots around three views: Top Stories, Popular and Upcoming.”

For now, though, the site won’t feature a commenting system. The team apparently decided that getting this feature right would take more than the six weeks it gave itself to relaunch the site. Digg promises to experiment with comments in the coming week. 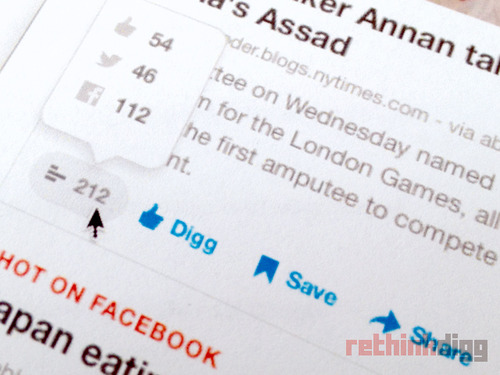 As for the voting system that was always at the heart of Digg, the new owners say that users will continue to be able to vote on stories but that the algorithm will also take Facebook shares and tweets into accounts (that’s actually a feature Digg planned for its v4 release before it scrapped it before the launch). Votes on the site, the new team says, will get priority but it sees shares on other social media sites as “important signals” that will be “closely monitored” by a team of moderators.

At first glance, this looks like a sensible redesign for Digg, but let us know what you think in the comments.