The process of recruiting volunteers is a pain felt by the entire American electorate: citizens are quick to hang up on complete strangers begging for their time and campaign organizations, as a result, are perpetually short-staffed. Amicus, a Y Combinator nonprofit volunteer-recruitment platform, may have found a clever way to ensure that citizens are only contacted by trusted friends. Amicus scours public and private databases and matches names up with their volunteers’ Facebook friends, assigning volunteer outreach only to those who have a personal bond between the caller. “Amicus’ friend-to-friend connections enhance our traditional outreach program and make it easier to mobilize our supporters online,” said Jared Schwartz, Director of Digital strategies, AFL-CIO, the largest federation of unions in the U.S.

The heart of Amicus is an online dashboard that presents volunteers with a ready made list of friends that need to be contacted, complete with a leaderboard, badges, and other gaming elements to incentivize the thankless job of political and charitable outreach. 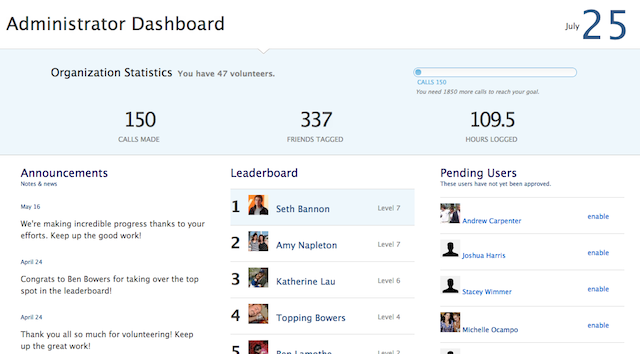 Efficiently collecting an army of canvassers is essential for boosting support, as experimental Political Science research has found that face-to-face contact is the only reliable way to increase voter turnout (boosting participation by about 7-10%). If Amicus can reliably get more boots on the ground for campaigns, they’d be a force of nature.

But, does the evidence support Amicus’ assumption that friends are better than strangers at influencing our civic involvement? Solid evidence shows that our associations are indeed influential. One clever study by David Nickerson of the University of Notre Dame found that voting is “contagious” between family members, by measuring whether or not the individual who did not answer the door for a canvasser also decided to vote. Another experimental study [pdf] found that neighboring canvassers are twice as effective at boosting turnout than strangers.

But, perhaps the most interesting research relevant to the Facebook generation is that close friends are much less politically influential than weaker friendships. “Close friends may be close friends in spite of their wrongheaded views, and regardless of their obnoxious political preferences,” write authors Robert Huckfeldt and John Sprague. Our best friends are forged as a result of childhood location, family ties, and life events. Those who we just want to have a beer with are likely chosen because we enjoy their company and conversation.

In other words, the very “friendships” that Amicus finds through Facebook are precisely the ones that are best for recruiting political volunteers (because, who is close with all of their +1,000 Facebook friends?). CEO Seth Bannon says that early results show that Amicus bumps volunteer acquisition by 50%, which jives with prior research. Given the relatively low-cost of their digital solution, and the potential impact of their platform as more organizations begin using it, Amicus is certainly a startup to keep on the radar.