“IBM wants it all and is aiming its guns on its last obstacle to industry control: Apple . Will Big Blue dominate the entire computer industry?” Steve Jobs asks us.

“The entire information age?!?” He asks again, “Was George Orwell right about 1984?” Before we have the opportunity to answer again, the Apple CEO introduces the crowd to the famous 1984 commercial directed by Ridley Scott that would eventually become a classic — some would say one of the most important commercials of all time.

Welcome to the set of jOBS. Yes, you read that right.

jOBS. A movie about the life of Steve Jobs, starring Ashton Kutcher as the man himself, Matthew Modine, and Dermot Mulroney. Directed by Joshua Michael Stern.

Welcome to HOLLYWOOD. Well, really, Pasadena. In LA, you get in the car to drive to your mailbox, so who’s counting?

Whether or not it feels “too soon” for Hollywood to be making a film about Steve Jobs, it’s happening. Not once, but twice. For those in the tech industry, this news is probably more likely to elicit cringes and eye-rolling than giddy excitement.

After all, Hollywood and Silicon Valley have never really been comfortable with each other — a difference in perspective which has only become more pronounced of late, with Paul Graham’s recent call to arms being a perfect example. So, when it comes to representing the life of a figure as iconic as Steve Jobs (whose legacy is equally as complicated as it is enduring), everything is amplified.

It was with these thoughts in mind that I flew down to Tinsel Town, where I was lucky enough to witness (and in a small way participate in) the filming of jOBS — otherwise known as “the one with Ashton Kutcher .”

For starters, just to clear up any confusion, there are two films about the Apple co-founder currently in the works. One is being made by Sony. The company recently bought the rights to Walter Isaacson’s extremely successful biography and is being adapted for the screen by Aaron Sorkin, the controversial but gifted screenwriter behind The Social Network, The West Wing, and many more. No doubt the rights to the biography and recruiting Sorkin cost Sony a boatload, so they’ll be looking to add plenty of supplementary star power in the cast and the director’s chair.

No, not that one. jOBS is the project of a first-time producer, a guy named Mark Hulme who, at first glance, has none of the credentials one might expect from someone taking such an active interest in the life of one of the Pirates of Silicon Valley.

Hulme is a billionaire from Texas who founded The Five Star Institute — a publishing, marketing, communications, and conference production company. Hulme had few connections in Hollywood, but felt a cosmic connection to Jobs and wanted to be a part of recreating his life on screen. In April, he described his motivation for making the movie like this:

On the day that his retirement was announced – with no big scandal or disaster – I noticed that the buzz about his retirement consumed our creative and IT staff for the entire day. I had never seen anything like that reaction. That was the spark. We immediately began researching and writing the screen play.

While entertainment is inherently part of Five Star Institute’s DNA, neither the company nor jOBS’ producer had made a movie on this scale before. This is also screenwriter Matt Whiteley’s first film.

In spite of all odds, the film found some supporters in Hollywood, and led to the production company casting Ashton Kutcher to play Jobs himself. Dermot Mulroney, Lukas Haas and Matthew Modine have all signed on to play Mike Markkula, Daniel Kotke and John Sculley respectively — with Book of Mormon’s Josh Gad cast as Woz.

This is, of course, a double edged sword. We have a first-time producer and screenwriter, and a lead who is better known for punking celebrities than anything else. Then there’s the goofy name. These things don’t exactly inspire confidence, right?

Well, regardless of how things turn out, you can be sure that those involved are taking this seriously — indie budget and first-timers or not.

TechCrunch Goes To The Movies

I arrived at the Pasadena Convention Center not having little idea what to expect. I had been told to dress in “business casual — khakis, button front shirts or polos in lighter color,” because cast and crew were filming a scene set at the 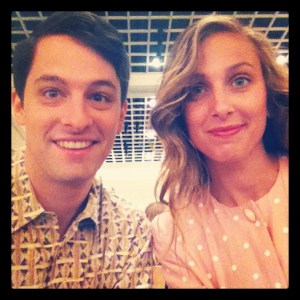 ii Convention of 1983, where Steve Jobs introduced the famous “1984” commercial to Apple employees.

Unfortunately, my training leans more to the editorial side of things, so I’ve had to lay off my costuming department and acting coach. Those in charge of casting sent me directly to wardrobe and make up, where I was given a hideous Hawaiian shirt, told to shave, and then joined the other 150 extras. Some wore 80’s-era Apple shirts, some wore suits, and nearly everyone sported a ridiculous hairstyle.

It was my first time as an extra — though I had made some appearances in Empson family home movies in the 80s and 90s — and was fairly wide-eyed throughout the process. I have since learned that seemingly everyone in LA has, at some point, been an extra in a movie.

It was remarkable to see a random collection of strangers be transformed into 80s geeks and Apple employees. It was all very surreal. And for those who haven’t had the opportunity to be an extra, I can tell you that it involves a lot of sitting (and/or standing) around and waiting. Eventually, we were herded onto the set, where we were greeted by open tables and a set that looked just what one would imagine that a 1980s convention center in Hawaii would like like. And since Apple had gone public in 1980 and minted scores of new millionaires, we were all happy and enthusiastically applauding.

The crew tweaked lighting and sound, and we were soon joined by Steve Jobs qua Ashton Kutcher, and began a series of takes. Jobs was in the middle of his famous 1983 keynote and introduction of the 1984 commercial.

Kutcher, for his part, seemed to be taking the Brando acting approach to inhabiting the Jobsian character. Although he’s known for a great sense of humor and did some joking with everyone involved, he barked orders, saying that the podium needed to be changed as it didn’t look like the one Jobs spoke from in his keynote. Radar Online has written that Kutcher has been accused of being “mean” on the set over the course of filming, and that crew has had it explained to them just what’s going on.

I was able to catch up briefly with Kutcher during a break, who while displaying some Jobsian impatience, was kind enough to break character for a bit and talked about how he and screenwriter Whiteley had met with a host of people close to Jobs to get a better feel for what the guy was really like every day. We chatted briefly about some Apple history, a few of the startups he’s funded, and then he was back to character.

Gizmodo has poked fun at jOBS for its cast, as the actors don’t look anything like the people they’re portraying. I, too, had some reservations just looking at the movie from 5 miles up. But, admittedly, if you asked me to pick someone who both looked the part and in some small way might be able to understand the part, it’s probably not going to get much better than Kutcher. While the guy’s dramatic resume is short, he’s a name people recognize, his name has become a recurring one in Silicon Valley, if not a respected one.

Plus, if you’re never going to be taken completely seriously by those in Silicon Valley, it doesn’t get much better than getting to portray Steve Jobs.

Other than what I saw that day on set, details about how jOBS is approaching its subject are somewhat scant. In its synopsis, the film is described as “Dark, honest, and uncompromising, “JOBS” plunges into the depths of Steve Jobs’ character, uncovering his motivations, his gifts, his flaws, his failures, and his successes. An immensely private tale spanning four decades, “JOBS” is an intensely character-driven story that is as much a sweeping epic as it is a personal tale.”

With Matthew Modine playing Sculley, there’s a chance that the film could focus on the relationship between the two, which could make for an interesting story. Modine has said that he thinks Sculley’s firing of Jobs was one of the more important things to happen to Steve Jobs, and played a big part in his becoming the Jobs we know today.

There’s obviously a lot of pressure on Kutcher to take the role seriously, and he’s trying to convey an air of believability. As far as I know, he’s never taken the method acting approach, and so it remains to be seen how well that intensity is going to come off on screen. It could be awful, it could be spot on, but the more it involves all the characters and the relationship between Jobs and other Apple executives and the people close to him, the better.

There’s no official release date, though it did finish filming this week, and I’ve heard more than a few suggest that they’re targeting December. The earlier they can push the movie out before Sony and Sorkin’s movie hits, the better. (Although if Forbes is right and this is actually a page from the script, it may not matter.)

Now all we need is the post-1999, iMac and iPod-infused jOBS sequel to really nail the story. This movie has an uphill battle all the way, and it’s going to struggle against Sony’s eventual output — the IBM of the two. The story of Apple’s rise is epic, and I hope Kutcher is just the guy for the Job(s).