Proudly anti-gay fast food chain, Chick-fil-A, is denying accusations that it created a fake account of a teenage girl, who defended the restaurant chain through comments on its Facebook page, after a boycott from one of its suppliers. Savvy users ousted the ringer account, “Abby Farle,” by proving that her suspiciously wholesome picture was actually a stock image, appropriately named ” Pretty Redhead Teenager Isolated on White Smiling Stock Photo”. Chick-fil-A flatly denied “impersonating a teenager”, but this hasn’t stopped nation-wide calls for a (surely entertaining) “kissing day” protest inside of Chick-fil-A’s stores on August 3rd.

In response to the massive social media tidal wave of searing indignation, social conservatives are staging their own counter-protest two-days before, complete with the firepower of arch-conservative and former presidential Candidate, Rick Santorum, twitter’s account:

The whole intolerance brew-ha-ha was sparked by a brazenly bigoted interview with the Baptist Press, wherein President Dan Cathy declared he was “guilty as charged,” for his anti-gay beliefs, “We are very much supportive of the family — the biblical definition of the family unit. We are a family-owned business, a family-led business, and we are married to our first wives. We give God thanks for that.” Cathy is no stranger to aggressively moralizing, as the company reportedly interviews the family members of prospective employees to uncover whether they had “been sinful or done something harmful to their family members.”

After the Jim Henson company pulled their adorable toy puppet from the children’s menu, Chick-fil-A attempted to one-up the boycott by claiming that they had actually initiated the toy recall, because there were “some reports” of kids getting their fingers stuck in the puppet (even though at least one story admits that no children had been injured, pictured below) 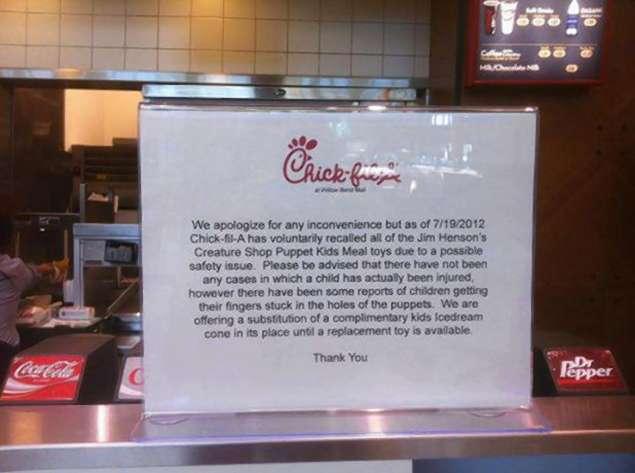 And, herein lies where the Pretty Redhead fake account comes into play: the “Abby Farle” account began defending Chick-fil-A’s pre-emptive recall on its Facebook page against accusations that it was just an obvious response to Jim Henson. “Busted” wrote one commenters, who posted a similar looking Shutterstock image of Farle’s avatar. 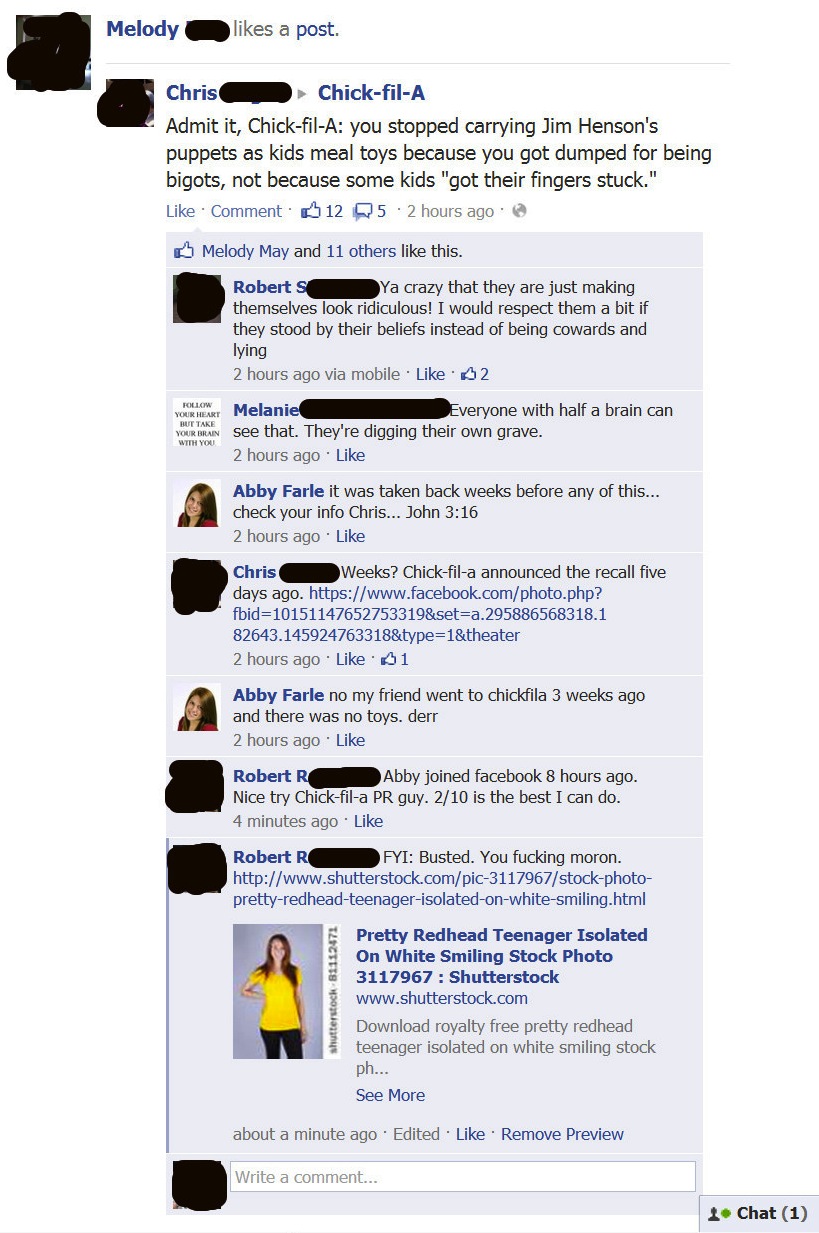 Whether or not the fake account was authorized by Chick-fil-A, or the rogue actions of a clueless PR flack, pro-gay rights groups are organizing a national same sex kissing day on August 3rd (and a counter ‘eat-in’ protest on Aug 1st). So, head over to your local Chick-fil-A next week for what is sure to be an entertaining (and civically active) set of events.