Zynga didn’t meet analysts’ already-low estimates in its just-released earnings for the second quarter of its fiscal year, in which it showed revenue of $332 million and lost $22.8 million, or 3 cents per share (according to GAAP measures). Analysts had predicted the company would earn 5 cents per share on revenue of $344 million.

The company also says it’s lowering its outlook for the rest of the year based on “delays in launching new games, a faster decline in existing web games due in part to a more challenging environment on the Facebook web platform, and reduced expectations for Draw Something.” It’s now projecting $1.15 billion to $1.225 billion in bookings for the year.

“The company achieved some significant milestones in the quarter including the launch of Bubble Safari, which is now the number one arcade game on Facebook, and the launch of The Ville, now the number two game behind Zynga Poker. Our advertising business continued to show strong growth with revenue up 170% year-over-year. Our games reached record audiences, achieving over 300 million monthly active users. We grew our mobile footprint five-fold in the year to 33 million daily active users making Zynga the largest mobile gaming network. We also faced new short-term challenges which led to a sequential decline in bookings. Despite this, we’re optimistic about the long-term growth prospects on mobile where we have a window of opportunity to drive the same kind of social gaming revolution that we enabled on the web.”

This is only Zynga’s third earnings report as a public company. Last quarter, it beat expectations, with revenue of $321 million and a loss of 12 cents per share (again, according to GAAP measures).

Recently, the company also announced Zynga With Friends, a cross-platform “social lobby” for its own games, as well as those from other developers. If successful, it could alleviate critics’ concerns that the social gaming giant is too dependent on Facebook.

As of 2:14pm Pacific, Zynga down 37 percent, to $3.18, in after-hours trading. The analyst conference call with analysts is scheduled for 2pm Pacific today. 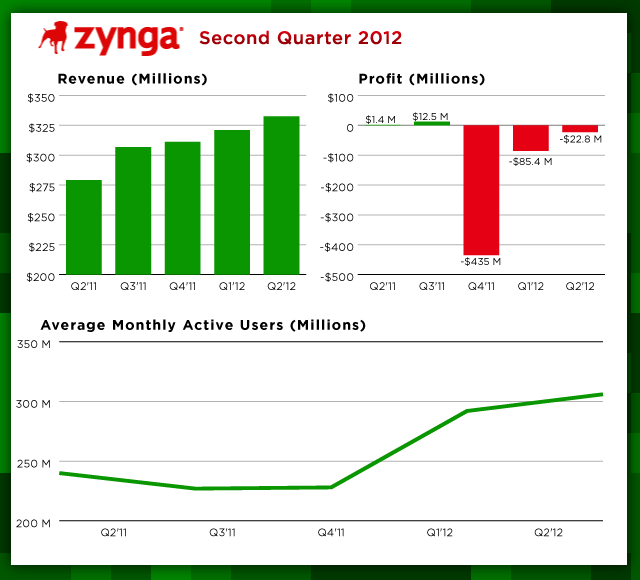