The announcement today encompassed the standard earnings information — revenue, spending, profits, and the like — which we’ll get to in a minute. But the real news most Tesla watchers wanted to get from the Q2 results was an update on the rollout of the Model S, Tesla’s new all-electric sedan that started shipping last month. 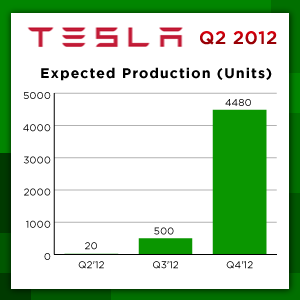 But as far as the Model S production goes, there was no real news — which, as they say, is good news. There has been a bit of skepticism about whether Tesla would hit its targets for producing the Model S, but according to the company’s release today, everything is still on target. The company said it is maintaining its previous projections of making 5,000 Model S units during 2012, with a steep ramp up in production. In June, the company said, it was making about 5 Model S cars per week. In the third quarter, Tesla expects to ramp up the speed to ship a total of 500 cars. The balance of the 2012 production — some 4480 cars — will be made during the final three months of the fiscal year.

On the financial side, top-line revenues were $27 million, $22 million of which came from auto sales, which represents a 15 percent boost from the first quarter. Those sales were split between its flagship sports car, the Roadster, and reservations for the new Model S. Tesla is sunsetting its Roadster vehicle — it’s no longer for sale in the US, and it is selling off the remainder of its Roadster fleet in Europe. Tesla said it expects to sell completely out of Roadsters by the end of 2012, and to shift its sales focus to the Model S worldwide in the months ahead. Tesla also makes money by selling powertrain components to Toyota for its electric RAV4.

The future for Tesla’s revenue supposedly looks much brighter. The company said it expects its full year sales for 2012 to be between $500 million to $600 million.

Meanwhile, making an automotive company from the ground up is not cheap. Tesla’s net loss for the quarter was $105.6 million — owing to R&D expenses of $74.8 million, selling, general and administration expenses of $36 million, and capital expenditures of $61 million. Tesla as a company is not in the red, however: Tesla had $266 million in cash resources at the second quarter’s end. $233 million of that was cash on hand, including Tesla’s Department of Energy (DoE) dedicated accounts. Tesla drew on $71 million from its DoE loan during the second quarter, leaving it with $33 million left in the loan facility.

I had the chance to test drive the new Model S earlier this month for TechCrunch TV, and I have to say, it was pretty sweet. Check out my review here, and I’ve embedded the video below:

Both graphs made (with amazing speed, I may add) by TechCrunch’s graphic designer and illustrator Bryce Durbin.