There is nothing more broken than the payments/banking system, which makes me and everybody else root for payments (and more!) startup Simple (formerly BankSimple). We all hate our banks and, especially if you are in SF, we constantly hope that the future will be better.

And, again if you’re like me, Simple is your great white hope: A Mint that won’t sell out and actually is responsible for your money, a banking interface that actually makes interacting with your lifetime quantitative value enjoyable and intelligible? Sure, count us in.

Well we’re in luck: Simple has really really subtly (simply?) launched to the public as of a couple weeks ago and is announcing it as of today, which means that they are now beginning to onboard their hundreds of thousands of signups.

I guess this is their announcement post, because as of now, yes, Simple is available to the public, with the caveat that there’s already 125k people on their waiting list (I can’t wait until my card comes in the mail!) and if you sign up now you can expect to be on it by next fall.

Also, one of their co-founders, Alex Payne, is leaving to follow his interest in working with programming languages and developer tools.

“Simple offers many great career opportunities for engineers, but not in some of the areas I’m most passionate about, particularly programming languages and developer tools. I feel that I have an enormous amount left to learn as a programmer, and hopefully a few things to contribute in that capacity as well. For that reason and some personal ones, I’ve stepped down as CTOat Simple.”

What all of the above essentially means is that a better way of banking is now totally accessible i.e. those of you who apply to Simple today will probably get access in the fall, which is a lot less time than I had to wait (two years).

Says Simple CEO Josh Reich, “We have over 100,000 folks who have requested an invite to Simple, and the immediate plans are to get as many people on board as quickly as possible. We’ve been enrolling customers beyond our original beta testing group for the last few weeks now and the response has been fantastic. We’ve been doubling our customer base each week and hope to reduce the wait time for new customers as we plow on through the summer. ” 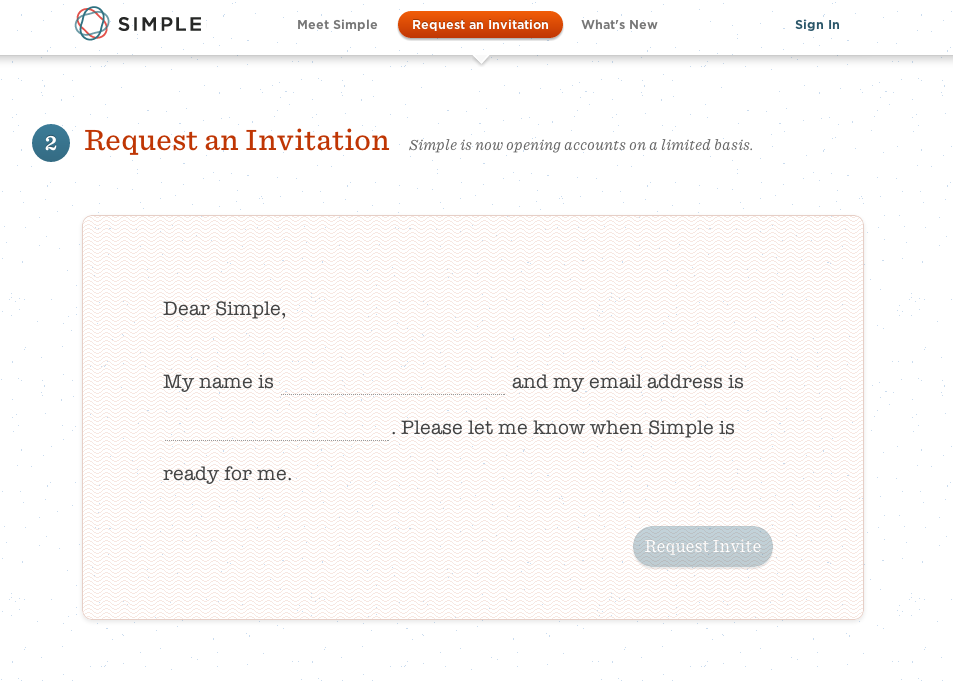 When asked who Reich viewed as competition in the Wild Wild West of the payments sphere, he said, “The reality is that our closest competition are the top four banks. They control over 40% of the market and they are the companies from which we are trying to take customers away from. Over the past 30 years banks have been earning more and more of their revenue, and a vast amount of their profits through fees and charges. We take a much simpler model that doesn’t put us at odds with our customer’s best interests.”

When asked what separates Simple from traditional banks, Josh responded, “Well we actually care.” Which is the best answer to these types of questions. Pro tip.