Path, the mobile-based social networking app aimed at helping people connect with their close circles of friends and family, is rolling out the latest update to its app: Path Version 2.5.

The update, which will roll out tonight to the 17 languages Path supports on its iPhone and Android apps, doesn’t have any groundbreaking new features, but there are some very clever incremental updates.

It comes just as Path’s new user growth is booming, CEO Dave Morin told me in an interview this week. “The past 2 weeks we’ve experienced our biggest growth weeks of all time, with higher levels of traffic than we’ve ever seen,” Morin said. “Most of the growth is happening here in the United States. American cities and communities are embracing Path all over the place.”

That growth surge — not the development of the 2.5 update — is the reason Path has had slowness and service interruptions over the past couple weeks, Morin said. “The [service issues] started before we even [started deploying] the release of 2.5. It’s because we’re experiencing unprecedented scale. Our infrastructure team is working literally around the clock.”

He declined to provide exact numbers on the new growth, but Path’s last publicly-released user figures were 3 million app installations, and more than 2 billion “moments” seen by Path users.

So, what’s new in Version 2.5? First, Path now lets users include the movies they’re watching and books they’re reading in their updates, in the same way that Path has long allowed people to share the music they’re listening to. The book data is pulled from iBooks, and Path expects to add more data sources going forward; the movie information is coming from Flixster/Rotten Tomatoes. The reason behind the additions is pretty straightforward — it’s stuff that people like to do, and it’s stuff that people spend a lot of time talking about. Morin said:

“We started with music on Path because we really care about art, and these things that deeply impact people’s personal lives and relationships. Every weekend we all go home from work, and we go to dinner, we listen to music, we talk about going to watch a new movie that’s come out, and we curl up with a book on a Sunday. These are things that people spend time doing, and they also spend a lot of time talking about them.”

Photos, videos are bigger and better

Secondly, Path has upgraded its photo and video features in 2.5. You’ll now be able to quickly snap photos using the volume button on your phone, you’ll be able to crop photos to square or landscape, and more filters will be available. Also, photos and videos will also be viewable in full-screen. Meanwhile, the camera’s capture feature has been sped up significantly, Morin said. “The camera is instant now, and it’s hard to describe, you just have to experience it. We believe it’s the most instant of the instant cameras.”

The last updates are pretty obviously aimed at making it easier to join Path, more natural for people on Path to encourage others to join the network — and at upping the participation of people once they have signed on to the service. Path 2.5 now now lets you send suggestions for who your friends should follow and add personal voice messages to friend invites.

It also has a “Nudge” feature (similar to a Facebook “Poke”) that’s meant to be used when you want to tell a friend to issue a new update to his or her Path. “We’d hear over and over again that people didn’t feel they had anything to post. This feature really encourages people who otherwise might not be sharers to share more,” Morin said.

Here are some screenshots of Version 2.5 (click to enlarge): 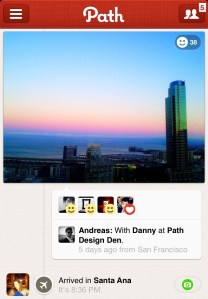 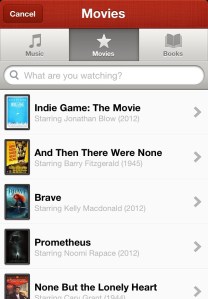 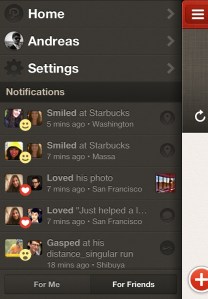