This morning, enterprise solutions provider Good Technology released the results of its latest activation report which offers a snapshot of mobile device trends in the enterprise. The company found that, despite the fact that Android smartphone usage in the enterprise nearly doubled quarter-over-quarter, iOS continues to be dominant platform there, currently led by the iPhone 4S.

The results further back up a report arriving earlier this week from mobile platform development company Appcelerator. It released data from a large survey of its developer community, finding that iOS has been surging ahead of Android, at least in terms of developer interest (53% said Apple was better positioned to win the enterprise, compared with 38% for Android).

While the latter report spoke more to developer sentiment – also a good way to tell which way the tide is turning, Good’s report comes from actual activations of both smartphones and tablets from thousands of its current enterprise customers. It’s more of a “where are we now?” kind of thing.

When we last looked at Good’s data was in January, when Android activations were only 35% of the total, compared with iPhone’s 65%. Today, Good says that Android activations reached 36.9% of total activations – a small bump, despite the fact that corporate use of Android phones and tablets grew 10% quarter-over-quarter. But Android activations have been slowly and erratically growing – 29% in Q4 2011, 32% in Q3 2011 and 25% one year ago in Q2 2011. Good attributed this quarter’s growth to the availability of new devices from Samsung. Meanwhile, iOS’s slight decline in growth was chalked up to “market saturation.” That’s what Apple’s earnings from yesterday indicated, too.

Leading the way was this time around in Android activations was the Samsung Galaxy SII, which had 4.6% of the total, and ranked as the fifth most popular device in the enterprise. Behind it was the Droid Razr (3.2%), and both it and the SII beat out the older Apple models of the iPhone 3GS and original iPad, now seventh and eighth, respectively, down from fifth and sixth last quarter. 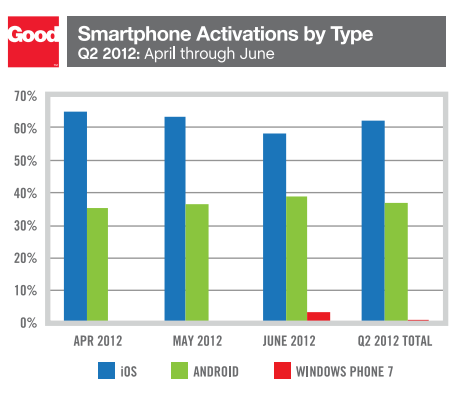 The top devices, in order, were the iPhone 4S, the iPad (the newest iPad, which Good incorrectly refers to as the iPad 3), iPhone 4, iPad 2, the Galaxy S II, Droid Razr, iPad (original), iPhone 3GS, Samsung Galaxy Nexus, and Samsung Galaxy Note. Yep, the phablet made a showing. 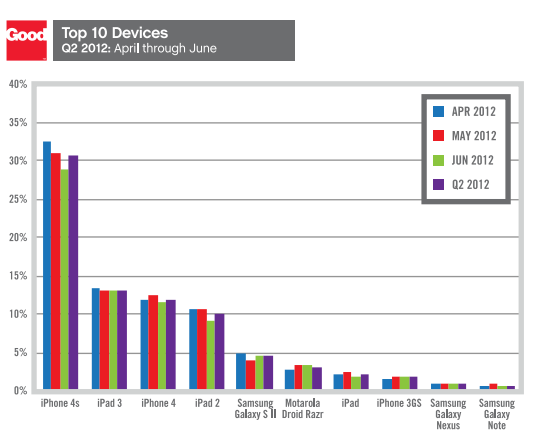 And here’s a surprise: Windows Phone even hit the charts this time around. While only accounting for 1.2% of overall activations, Good says that number may grow as the rollut of Windows 8 gets underway and more Windows Phone devices hit the market. 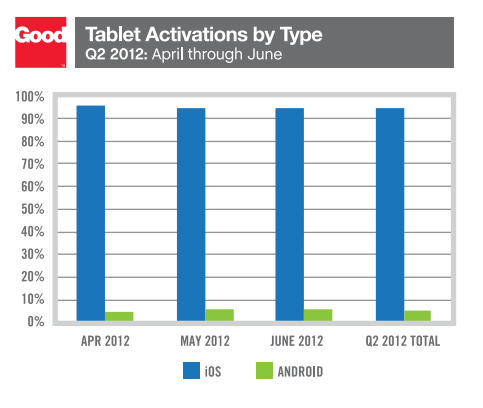 As for who’s using all these devices, Good found the Financial Services industry to still lead with device activations up to 37.8% from 26.1% in Q1. The most notable shifts it found, however, were a big drop in deployments in Business & Professional Services industries, and an increase in use in the Government/Public Sector (up from 5% to 8%). 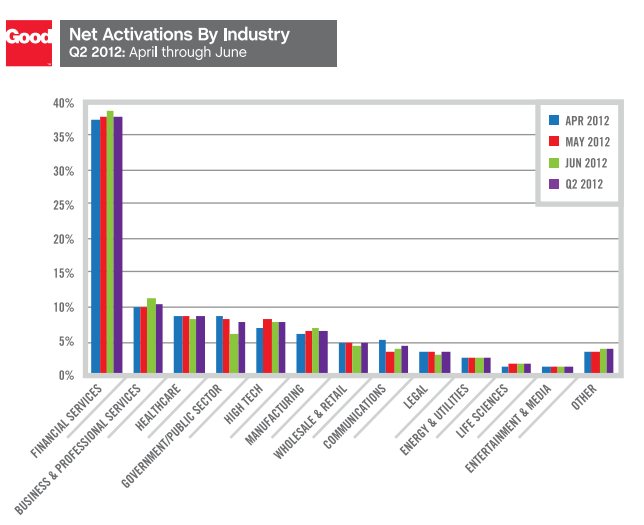 Correction, 6 PM et: Good says its original report contained a typo: tablet adoption in the previous quarter was 2.7%, not .07%. We’ve corrected this article to reflect the change. The overall trend (a slight gain) still remains.