Online kids’ clothing consignment shop thredUP says its recent transition from online swap meet to clothing resale service has been working. When the company was originally founded back in 2009, the goal was to offer a platform where parents could trade boxes of used kids’ clothes directly with each other. But despite some steady but slow growth, thredUP made the shift into consignment this past March. Now parents send in clothes to the service, and receive credits to spend in the online shop. Since the change, thredUP reports 50% month-over-month growth, and says it’s now on track to sell over 100,000 items during back-to-school shopping season.

Voris has spent over a decade on automation and process engineering at a number of companies, including also Shutterfly and Cisco. Says thredUP CEO James Reinhart,  Vorbis and Rendich are “incredible assets” who know what it takes to build “a world-class operations infrastructure on a national scale.”

“Just like Netflix, thredUP will have a massive online inventory,” Reinhart says, explaining how Voris will help the company scale. “This type of business brings unique challenges, and requires a sophisticated operations foundation. John has the experience we need to automate evaluation, itemization and distribution of used clothing, and move inventory quickly from home to home across the country.” He adds that all-around scale will continue to be a focus for the business, in addition to forthcoming improvements to search, merchandising, and personalized shopping.

Something that thredUP already has in common with Netflix is its ease-of-use. Parents don’t have to figure out the shipping for themselves – they just request a postage-paid bag in the mail. Currently, the bag is free, but the plan is to charge a $4.95 “bag deposit” which is fully refunded when the bag is returned. All you have to do is stuff the bag with all your kids’ clothes and send it back. 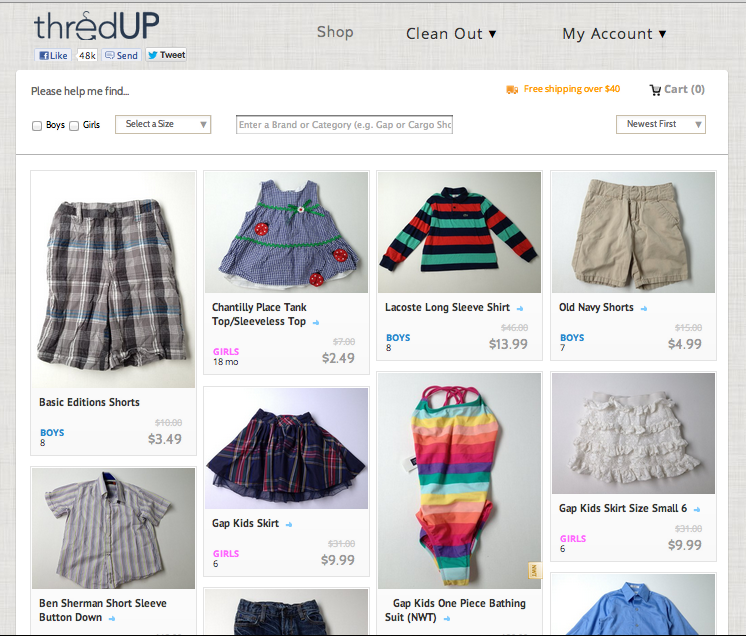 There are a few other stipulations to using the service, which, in my personal experience as a paying customer, weren’t overly troublesome. Clothes have to be in relatively good condition – that is, the same stuff you would try to consign, not dump at Goodwill. There are a few lower-priced brands which are rejected, as are underwear, socks and non-clothing items. I was kind of disappointed I couldn’t unload infant clothing on the service (under 12 months), but this is because demand is low, the company has found. Pricing for the clothes sold in the online store is competitive with brick-and-mortar consignment stores, and the clothes I’ve received  have been greatly above general hand-me-down quality. 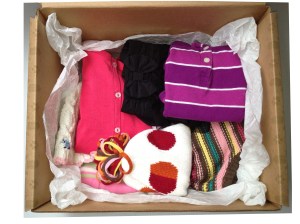 In addition to the new hires and above growth numbers, Reinhart also shared a few other metrics related to its current status. There are now over 2,500 new items added to the site each day. Plus, they’re expecting this number to grow to 10,000 by year-end, and drive daily inventory turns to 5%, which is over 6x the pace of traditional retail, he says.

Curious as to traction, I asked about other numbers related to member count and inventory. While he declined to share registered users, he said that the site has just passed 110,000 visits in July, and they now have some 80,000 items in stock, 1,000 of which are sold daily. At any given time, only select items are featured when browsing the service – right now, for example, there are 42,000 items visible, he says. And currently, visitors can browse through clothes from roughly 5,000 different clothing brands at present.

Since the shift in business models in March, thredUP has received and processed 300,000 pieces of clothing and families are earning $20 to $40 per bag on average. (That’s fully stuffed, for what it’s worth – my bags have been much lighter, and worth less.) The company is also seeing 50% return rates on customer visits, which is promising.

ThredUP is available online and via mobile (which I’ve just happily discovered, despite the apps’ launch earlier this month.) ThredUP is backed by $8.62 million in funding from Trinity Ventures, Founder Collective, NextView Ventures, Redpoint Ventures, David Beisel, and others. The company has just opened a new 60,000 sq ft. distribution center in San Leandro, and is planning to expand again in 2013.