Labor-marketplace TaskRabbit is today announcing a $13 million C-round of funding, led by Founders Fund. The C-round will bring the collaborative consumption startup’s total funding to $38 million.

Newly reinstated TaskRabbit CEO Leah Busque tells me that she will be using the funding for aggressive company expansion, with her sights set internationally on London. In four years the startup has gone from two to 53 employees, and grown from its birthplace in Boston to outposts in Austin, Chicago, LA, Orange County, New York City, Portland, San Antonio, Seattle and San Francisco.

Busque hopes that TaskRabbit will “revolutionize the world’s labor force”; “It’s our job to deliver this platform and the resources and tools to do so.” She tells me that her ambitious plan for the company led to her taking on extra funding, “Let’s get this done now,” she remembers thinking about TaskRabbit’s future, “This is all about getting the right people in place and around the table.”

Busque views TaskRabbit’s competition as the crop of task startups like Exec which have turned categories of posts on TaskRabbit into niche verticals. To complement the startups who use the TaskRabbit API to outsource tasks, like Astrid and Producteev, Busque is planning on tailoring the TaskRabbit platform around these specific verticals.

She views household chores as the most ripe area for expansion, and the company recently launched Deliver Now, an anytime delivery service to compete with one of those startups, Postmates, which is an “Uber for couriers.” 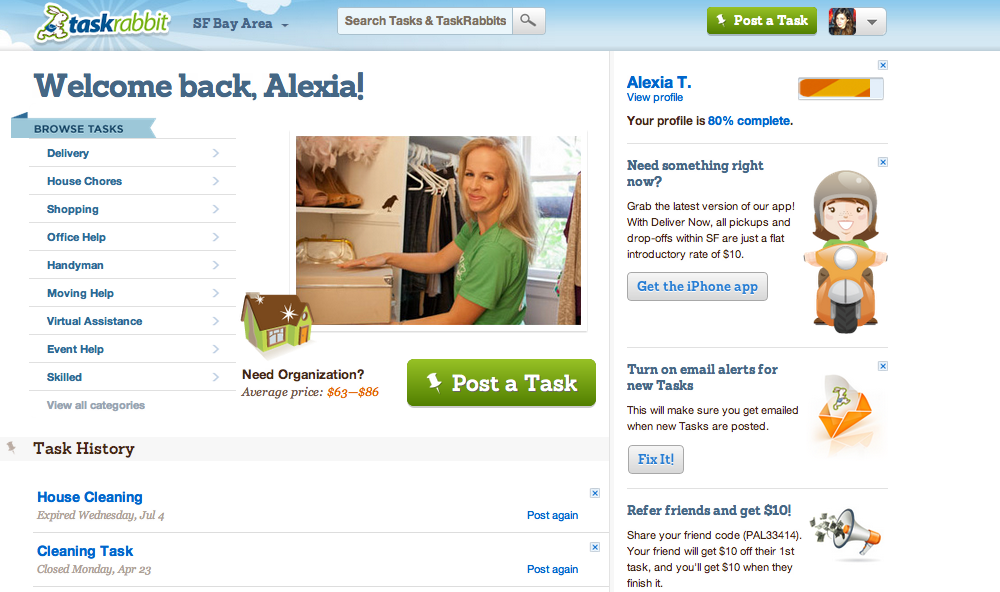 The fact that Founders Fund, which prides itself on its “big idea” investments like SpaceX, Palantir and Climate Corp, took an interest in TaskRabbit seems natural to the industrious CEO. “One area that they haven’t delved into is the labor market, the way people find jobs. People are starting to rethink the concept of full time work in general, and the younger generations want to be empowered to have more control over their work.”

“The U.S. has much higher underemployment and unemployment than it should not because there isn’t supply and demand, but because supply and demand have such hard times meeting,” new board member Bruce Gibney tells me, confirming that the VC firm made the investment because labor is in dire need of innovation.

“TaskRabbit solves both sides of the problem, matching pre-screened high-quality TaskRabbit Runners with responsible Task Posters in a simple system that ensures work gets done quickly and well, at the most competitive price. In doing so, it goes a long way to fixing the largest and worst structured market in the world, and provides thousands of people with the opportunity to work on their own terms.”

So will TaskRabbit eventually offer the perks and benefits provided by more traditional employers? “Absolutely. There is definitely big potential there and we have been looking into it.”

I for one am looking forward to a future where technology leads to a yield management system of human resources, especially one that leads to increased societal support like healthcare. The average unemployment rate in the U.S. alone is at a scary 8.2%, and don’t make me get started on what’s going on in Greece.

(Interview with Leah via Kevin Rose’s Foundation. You can read more about TaskRabbit here.)