NetworkedBlogs, the popular platform that lets bloggers syndicate their work to social networking sites and embed social widgets on their blogs, is changing focus. From today, it will be relaunching its homepage to focus around a new, panorama news reader that lets you follow news on other blogs and the rest of the web, pin articles for reading later, and follow individuals — moves that it’s making to widen its audience beyond that of bloggers, according to Waleed Abdulla, the founder of Ninua, the developer behind NetworkedBlogs .

The aim is “shifting from building tools for bloggers, to building tools for both bloggers and readers,” he tells me. The dual-focus, he says, has always been the aim of the company, but it has only been possible to put it into action after receiving backing from 500 Startups and TMT Investments last year. To date, the company has raised $450,000 in seed funding.

To be clear, the news reading development doesn’t mean NetworkedBlogs is dropping its legacy business: it counts some 750,000 blogs in its network, which use the platform to publish feeds to Facebook and Twitter, and to create tabs for Facebook pages. “Of course we continue to improve our blogger tools as well,” he told me.

While that platform gets used tons daily by those 750k blogs syndicating their content elsewhere, right now the main site gets just over 1 million monthly visits, says Abdulla. The site’s existing, basic news reading app (“just a list of links” is how Abdulla describes it), had only 50,000 visits per month, he says.

The new news reader will give Networked Blogs a crack at raising both of those numbers — and potentially developing it into a consumption platform as much as one used for aggregation and distribution. “Now that we have a much better reading experience, we hope to change [those visitor numbers] soon,” he says.

It will, of course, be contending with a number of other services that are also vying to be the news readers of choice for today’s web consumers. They include mobile-friendly apps like Flipboard and Pulse, Twitter and its many clients, Google Reader and more.

NetworkedBlogs will be approaching this from the standpoint that it already has some traction with bloggers around its existing services.

Among the features: a much more visually-led layout, which uses images from content being syndicated. 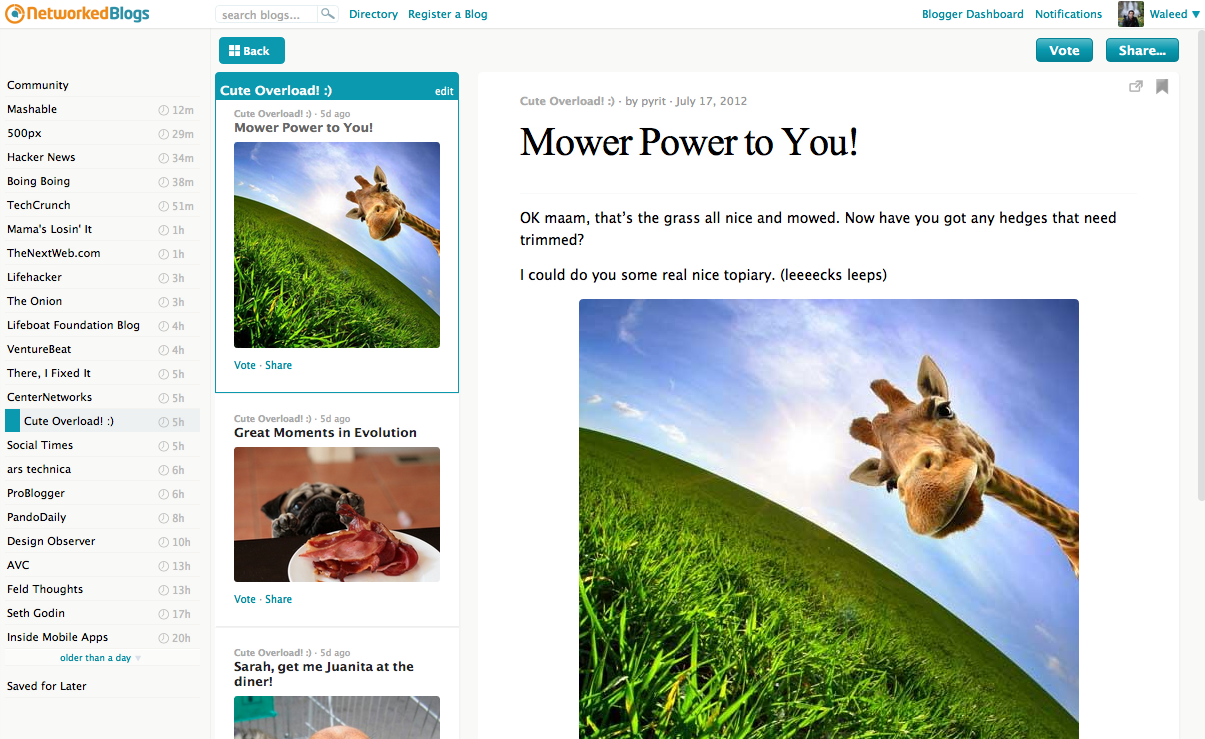 And the dashboard-style view, with each blog ordered in columns, is reminiscent of TweetDeck. And for those of us who might use this to keep up on the latest news, there is a handy indication in the main list of titles that tells you the time of the most recent update to that blog. 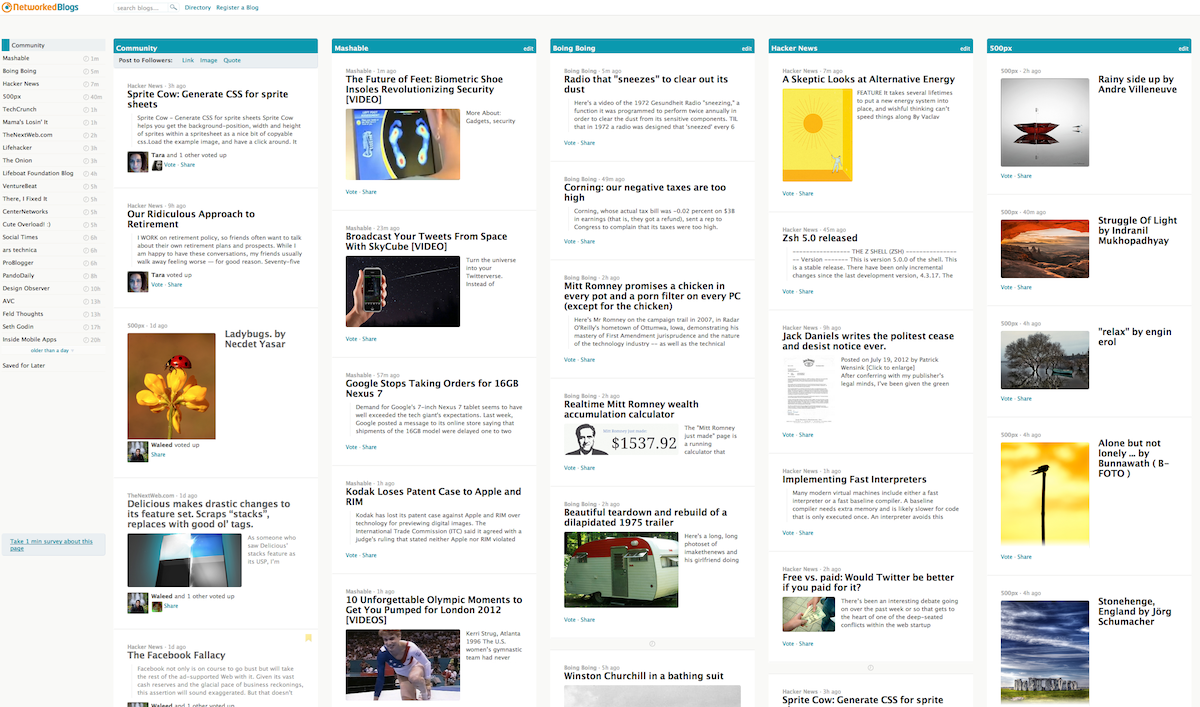 Abdulla tells me that content on the reader will not be limited to that of the 750,000 blogs.

“You can follow any blog that’s already registered on NetworkedBlogs, or if it’s not, you can add it yourself. The only requirement is that it has an RSS/ATOM feed because behind the scenes that’s how we fetch the content,” he says. He notes that this version does not yet support importing OMPL files or subscribing to feeds without registering them in the directory. “Hopefully soon, though,” he adds.

Mobile. The new service is going live on the website, and so far there are no plans for new mobile apps. Last year, Ninua launched a separate, news sharing app for Android — also part of the strategy to extend beyond blogger services. Abdullah notes that the developers have been “hearing from friends” that they want to see our news reader on the iPad, so that might be the next likely step in mobile, he says.

A film walking you through the changes is embedded below.