Gather is a newly launched mobile application which allows you to create “disposable” micro-meetups which can be quickly broadcast to Facebook and Twitter.  It’s meant to serve as a lightweight tool that helps you share your intended plans ahead of your Facebook or Foursquare check-in, for example. The benefit to using this app, instead of posting directly the to social networks themselves, is that it centralizes friends’ plans, so you don’t have to obsessively check Facebook and Twitter for updates and news. If your friends are doing something fun nearby, you’ll just get a push notification instead.

The app was created by former Yammer, CouchOne, and Mozilla developer Mikeal Rogers, and open web developer and Code for America fellow Max Ogden. The two had been collaborating on weekends, initially working on a larger vision of an “achievement engine for the real world,” but soon realized that users didn’t want apps that auto-tweeted so-called “achievements” for them. The earlier project also didn’t really serve the goal of getting more people out and doing things together. 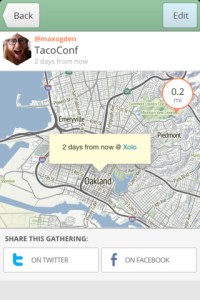 Although the concept of micro-meetups and sharing social plans is not new (see now-shuttered Forecast and Holler, for example…as well as every social events calendar ever), Gather is approaching the space not as “Yet Another Social Network,” but as a utility. And instead of having users shout into a seemingly empty void, Gather builds on top of your Facebook and Twitter social graphs. That means if your friends on those two networks begin using Gather to post plans, you’ll know – as long as they’re within 50 miles.

The app also supports a “nearby” feed which shows posts from just a mile or two away, but this isn’t fleshed out much beyond San Francisco (Gather’s home base) at this point.

To be clear, Gather isn’t a competitor with event platforms like Eventbrite, Meetup, Cvent, or others. “Those have a lot of infrastructure behind them,” says Rogers. “We don’t even require an end time for an event. You just put in a start time, a place from Foursquare, and a name for it, and you’re ready to go,” he says. “We really wanted to be much more lightweight…what a tweet is to blogging, we are to Meetup.com,” he explains. 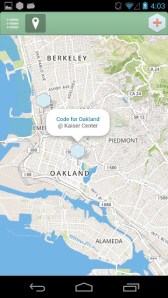 Currently in the works for the app is Foursquare check-in support (for after you’ve arrived and want to re-share your plans), calendar integration, and expanded Android platform support. The current version only works on Android 4.0 and up, which, although that’s only some 15% of the userbase, Rogers estimates that it will at least make the app available to an important target demographic: early adopters.

As for a business model, that hasn’t been figured out yet – the team first wants to see how people use the app and whether it gains traction. Rogers says they’re working off advice they received from Tim O’Reilly here. “The business model will be really evident, it will be really obvious, and just let that happen,” Rogers says O’Reilly advised, “and don’t come into that with any preconceptions.”  However, that hasn’t stopped Gather from raising a bit of seed funding – under $500,000 from Atlas Ventures has already closed and Rogers says Gather is “good to the end of the year.”

Now let’s see about that traction. You can try out Gather for yourself from here.