Huddle, the cloud collaboration company that picked up $25 million in funding in May, today is launching a significant update to its platform: it’s adding in a social communication layer to its service, so that when people share and work together on documents online, they can also talk to each other about them.

The move puts Huddle into closer competition against companies like Microsoft, whose $1.4 billion purchase of Yammer closed today and is now likely to create more social collaborations of this kind in its own products. (The picture here, in fact, is from Huddle’s in London, where it parked this sign in front of Yammer/Microsoft’s HQ to drive the competition point home.)

The launch is also very much in keeping with the trend of companies like Acunote and Asana making it easier for disparate colleagues — or even those in the same office who don’t talk in person much — to be able to keep up on what others are doing; plus the second trend of putting significantly more live content into the cloud.

With this new version of the platform, Huddle is working right in the center of where a lot of other enterprise-focused companies want to go. Microsoft’s purchase of Yammer, you can imagine, will likely (hopefully) be integrated into a bigger collaboration suite for businesses; and similarly you can see Google edging in a converged direction with its cloud services, too. However, while these heavy hitters continue to lag on implementing services like this, smaller Huddle has stolen a march.

“The new Huddle is the first enterprise tool that brings together content, conversation and enterprise-level security, giving workers a full 360-degree view of information that is important to them,” says Alastair Mitchell, CEO, Huddle, in a statement.

He notes that customers have seen the time taken to find and share information reduce by half. “Discussions are focused on specific content, knowledge is transmitted to the people that need it and the enterprise data store is enriched and available for everyone in the enterprise ecosystem. Legacy ICT systems no longer support the new ways of working and Huddle is leading a transformation in the ECM space, ensuring people have access to higher quality content, productivity is increased and costs are reduced.”

Huddle’s new version is significantly pared down in terms of how it looks, with the simplified interface pointing users to view and interact with files, as well as see related discussions and metadata in one central place — the idea is to keep people from jogging from one screen to another, or one application to another — both of which can become time-consuming distractions.

The company has also worked in some features that are a hat-tip to services like Yammer and Twitter, with the ability to @ mention someone to alert them to a message. Also included are version histories and audit trails to look at individual revisions on documents.

Huddle says the new version of the platform is already available for all customers, which include 80 percent of the Fortune 500 and 80 percent of central UK government departments. The company’s projecting an eightfold increase in revenues this year. 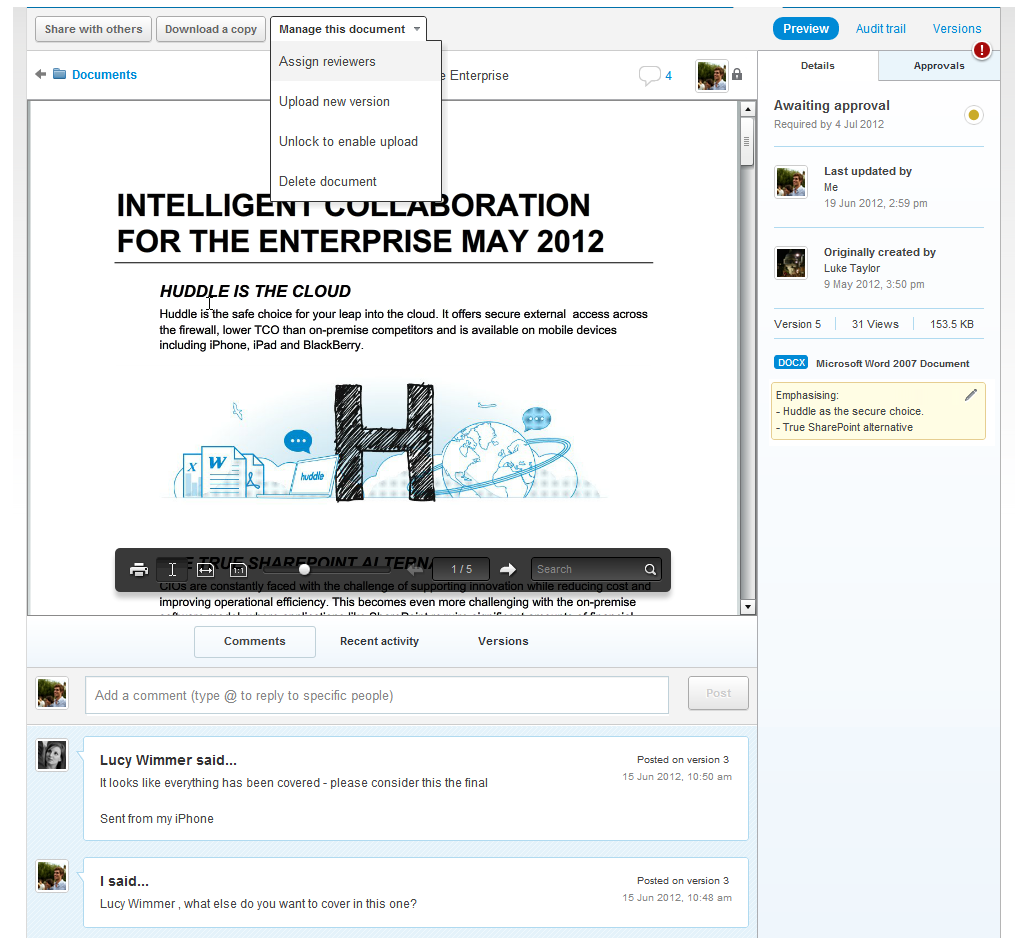