With mobile video being all the rage, multiple startups have emerged to make it easier to shoot and share videos with friends. Following on this trends a small team within DreamWorks Animation has assembled to create an app called Ptch with a unique value proposition: Users create interesting, shareable videos with the app. But they can also share those videos and open them up so that others can remix and mash them up.

Ptch isn’t just about taking a single video, throwing a filter on it and tossing it on the social networks, like Socialcam or Viddy. Nor is it about selecting a bunch of media and having a video automatically pieced together, like Animoto. Ptch users have to do a little work to piece together their videos. However, the results end up being much better than most other mobile video tools out there.

The app is built around a really easy drag-and-drop experience to enable users to quickly piece together photos and video assets to their, um, Ptches. It works like this: Users select media from their camera roll or from networks like Instagram, Google+, Facebook, Tumblr, Twitter and Viddy. They can then drag and drop those assets into whatever order they like, add captions, and select from different “themes” to spice up their video. Users can even select from a wide range of licensed music to add to their Ptch. The app then does the hard work of stitching those assets together into a video, which they can share on Facebook, Twitter, or within the app itself. 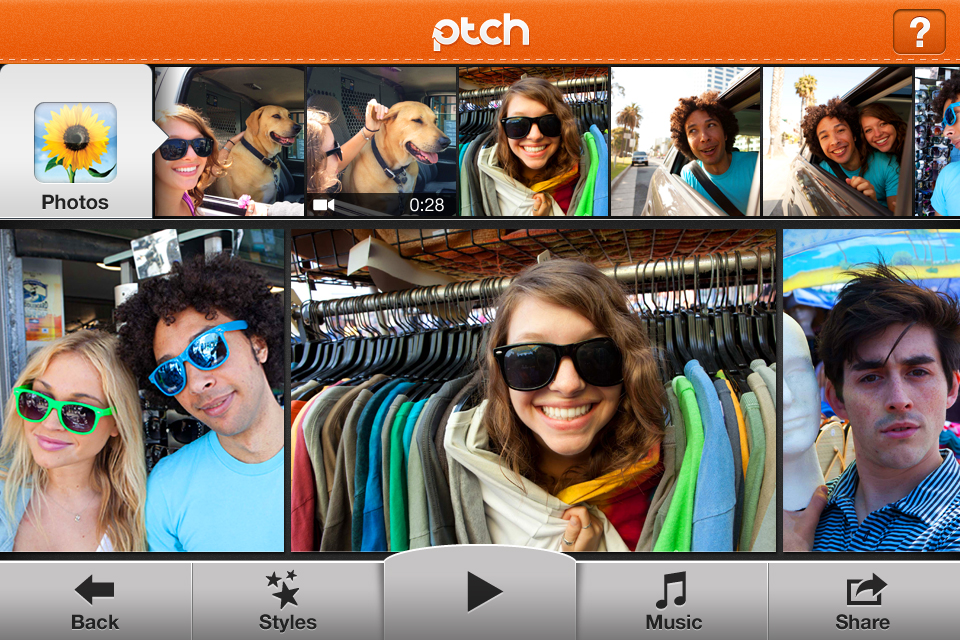 Ptch is the brainchild of DreamWorks Animation CTO Ed Leonard, who has taken the helm as CEO of the startup within DreamWorks. And that’s how it’s being run — like a startup. While the 20-person Ptch team includes some DreamWorks employees who bring expertise around advanced video rendering and other features, about two-third of the people working on the app were recruited from outside the film studio, from companies like Yahoo and Myspace.

When demoing the app, Leonard told that Ptch was created to inspire a type of “living media,” which will allow users to remix each others videos. Users have the option of making their media available to others, who can play with their individual assets and mash them up to make new movies. The idea is in part to enable friends and people with shared experiences to tell stories with each other and re-use popular assets that define moments they were a part of. (Don’t worry, for those less adventurous, there’s always the option of “locking” videos so that people can’t mess with your media.)

The app is free, and the team hopes to make money off of microtransactions, as people will pay for different themes to express themselves. There’s also the possibility of using the app for co-marketing of major events or brands using it to build campaigns around their products. That said, it’s such a small, experimental part of DreamWorks Animation right now that Leonard and team aren’t really focused on the monetization aspect — just, you know, getting the app out there and in the hands of users, and seeing what they do with it.