When it comes to predicting how companies or stocks will perform, we all have our own methods of fundamental analysis (I personally prefer voodoo). But, generally speaking, for the everyday investor, it can be tough to pick out the key metrics and stats buried in the ocean of unreliable financial data that permeates the Web. While there are a bevy of free engines for realtime company info, like Yahoo Finance, many lack detail and fail to offer the advanced tools we need to filter the noise and build comprehensive, long-term projections.

Founded in 2009, YCharts set out to offer a legitimate alternative to the Yahoo Finances of the world by becoming a full-service resource for detailed and reliable financial information. The startup wants to turn everyday investors into savvy stock analyst by digging into long-tail data from a variety of sources to get a glimpse into the outlook of your portfolio companies and actually understand the companies you buy and invest in.

And because a picture is worth a thousand static rows, columns and ratios, YCharts (as its name would imply) has focused on charts — rather, on becoming the mother lode of chartable financial data.

The startup offers graphs and plots on umpteen different categories, starting with those common to technical analysis, like 200-day moving average and price/volume metrics — and going from there. So, YCharts users can poke through price charts, focus on individual metrics or combine a variety of data points in millions of different permutations.

And that’s where it aims to differentiate: Breadth and flexibility. By allowing you to compare dividend yields, total returns, and 100 other metrics that let you weigh your holdings against others, YCharts gives you a chance to better understand the value of your investments in the long-run.

It’s for this reason that, since raising $3.5 million from the 30-year-old financial data giant Morningstar last November, the startup has been on the up and up. YCharts founder and CEO Shawn Carpenter tells us that the company is now seeing 500K visitors per month and has expanded its data coverage to over 500K data series, which includes over 100 metrics on 5K equities, commodities, forex and interest rates. On top of that, users can now combine over 40K economic indicators with the rest of its equity data.

500K visitors per month may not seem like a lot compared to the Instagrams and Facebooks, but considering that there are a number of free, easily searchable resources for financial data, growing from 30K to 500K in less than 18 months is a good sign. After all, YCharts relies on offering enough of a taste of its free tools and reams of data to get you hooked before leveraging its business model, in which users that want more advanced analytics pay $40/month to access 30 years worth of metrics and ratios and a bunch of advanced calculations. 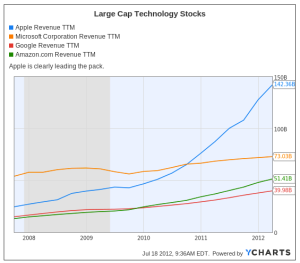 On top of its free and Pro offerings, YCharts also offers third-party sites, journalists and bloggers the opportunity to create their own charts with its so-called Chart Creator.

Chart Creator, which has recently been updated, is a great tool for startups, media and the like, looking to quickly graph out individual metrics or combinations thereof. The feature now supports all 5K of YChart’s stocks with 100 metrics each, 2.5K ETFs and 40K economic indicators, all of which can be combined in any permutation — in addition to being able to add up to six metrics from 500K options, titles, notes and recession dates. (Here’s a techie example.)

This is awesome because, historically, this type of data and charting functionality has really only been available to professional analysts and economists. The YCharts CEO believes this is the reason that the tool has begun to see increasing adoption among editorial teams and contributors and is currently being used by Motley Fool, SeekingAlpha, TheStreet.com, Business Insider, Forbes, Morningstar, Zacks, StockTwits, LA Times and The Chicago Tribune — to name a few.

The tool is spreading rapidly and is currently used by the editorial team/contributors at Motley Fool, SeekingAlpha, TheStreet.com, BusinessInsider, Forbes, Morningstar, Zacks, StockTwits, Gigaom, AllThingsD, LA Times, Chicago Tribune and a ton of others.

Thus, in addition to the 500K visitors on YCharts.com, Carpenter said that the startup is generating millions of impressions via its partner sites and is working towards the goal of facilitating the “visualization of the financial conversation” everywhere. As part of this, the team plans to launch a higher-end version of its Chart Creator later this year.

But what would the service be without giving investors the opportunity to communicate with other like-minded armchair analysts? YCharts subscribers can turn their data points into sharable plots that can be sent via Twitter or StockTwits, tweeting messages that cut straight to the chase, offering abbreviated URL links to charts and tables.

The YCharts team has clearly put a good deal of thought into how to better communicate the crazy amount of complicated, disorderly, and often unreliable financial information. It’s well on the way to offering a viable alternative to Yahoo Finance and a more affordable option compared to the Bloombergs, even though it has nowhere near the same traffic and user base. So, in the end, if YCharts yearns for that big audience, it may work better as part of a larger entity or portal. But, in the meantime, Carpenter says that the team will continue to focus on adding value to its exhaustive financial data, while keeping things clean and relevant.