Just a month after Foursquare unveiled a totally rebuilt version of its consumer-facing social mobile location apps, the company is rolling out a completely revamped version of its web experience for merchants.

Noah Weiss, the product manager who oversees all of Foursquare’s merchant-facing tools, tells me that the revamp has taken the better part of the past year. “We’ve actually completely redesigned all the merchant tools, and we have literally rewritten them from scratch,” he said. Merchants will see a completely redesigned web dashboard in a roll-out that will begin this week.

From the perspective of Foursquare’s consumer users, the most noticeable new feature from the redesign is something called “Local Updates,” which Foursquare is describing as a tool to help business owners engage more with their loyal customers in a relevant way.

It’ll work like this: Business owners can use Foursquare to issue updates about things like daily specials and events, complete with text, photos, and deals. If a Foursquare user has checked into a business several times or “liked” it on the app, they’ll start receiving that business’ updates when their phone location indicates they are in the same city.

So, I could “like” my favorite cafe in Seattle on Foursquare and receive updates on its daily specials while I’m in town. But when I’m back home in San Francisco, its updates won’t fill up my Foursquare feed.

From Mom-And-Pops To Huge Chains

Local Updates is made to be used by small independent merchants and large chains alike, Weiss said. A cool perk for chains is that they can either issue updates across their entire fleet of storefronts, or to individual locations one-by-one. For example, Whole Foods can use Local Updates to make a nationwide announcement regarding a deal on wine across its entire chain of stores; the company can also use it to broadcast a deal on locally-grown avocados to just their Southern California locations.

The merchant tools are still completely free for businesses to use, but revenue generation does seem to be getting closer. New features for merchants are on the way, Weiss tells me, and those could well have some money-making elements attached to them.

Here are a few screenshots of Local Updates (click to enlarge): 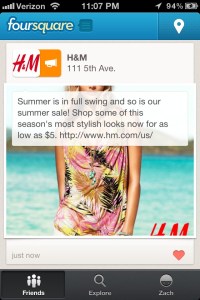 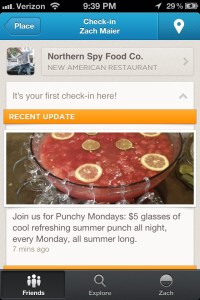 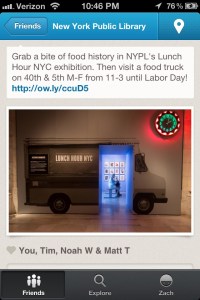