Revenues from mobile ads are only a small fraction of the overall digital advertising pie — and an even smaller slice of overall advertising revenues, but some research out today from the Interactive Advertising Bureau underscore why that may well change in the future: ads that appear on touchscreen devices like tablets and smarphones are showing some of the highest levels of engagement of all digital ads.

The report, conducted in conjunction with ABI Research, is the result of interviews with 552 smartphone owners and 563 tablet users and presents a pretty comprehensive picture of how those users are interacting with ads on their devices — covering topics like what media they are consuming when they are viewing and responding to ads, where they are, what time of day it is, what ads work the best, and what users do after they see the ads. At a time when the mobile ad market is still thin on comprehensive and standard reporting metrics (although the IAB is working on that, too) and scale compared to online ads, the  results could prove a useful tool for those looking for how best to tackle mobile ad campaigns in the future.

The 70-page report is full of data and worth a look. We’ve embedded the report below, or you can go directly here to see it. Here are a few of the more interesting takeaways:

Why the difference? The IAB doesn’t delve into that question, but it seems that screen size, and subsequent ambition of the ads, will play a big role here.

The medium is the message. Also, as we’ve seen from other tablet research, people are more likely to be using their tablets to read and consume entertainment media for longer periods of time, while smartphones are about short bursts of use. Those shorter bursts imply that users will be less inclined to spend time clicking around on ads than on the tablet.

And 70 percent of respondents in the survey said they viewed their smartphones as essential objects in their lives, like keys and wallets. Interestingly, that’s the same percentage of people who viewed their tablets as primarily entertainment and media hubs.

That doesn’t mean that smartphones are a dead end for mobile ads — but it does mean that the kind of promotions you do there have to take into account what kind of audience you’re targeting.

“The key for marketers is looking at how consumers use these devices in different ways, and tailoring brand messages and strategies accordingly,” Anna Bager, VP/GM of the Mobile Marketing Center of Excellence at the IAB, in a statement.

Tablets a clear winner on content consumption, with smartphones only outscoring them for “on the go” content. The table below seems to indicate just how much the tablet is acting as a replacement for the home computer or even TV  — something NPD also pointed out last month. 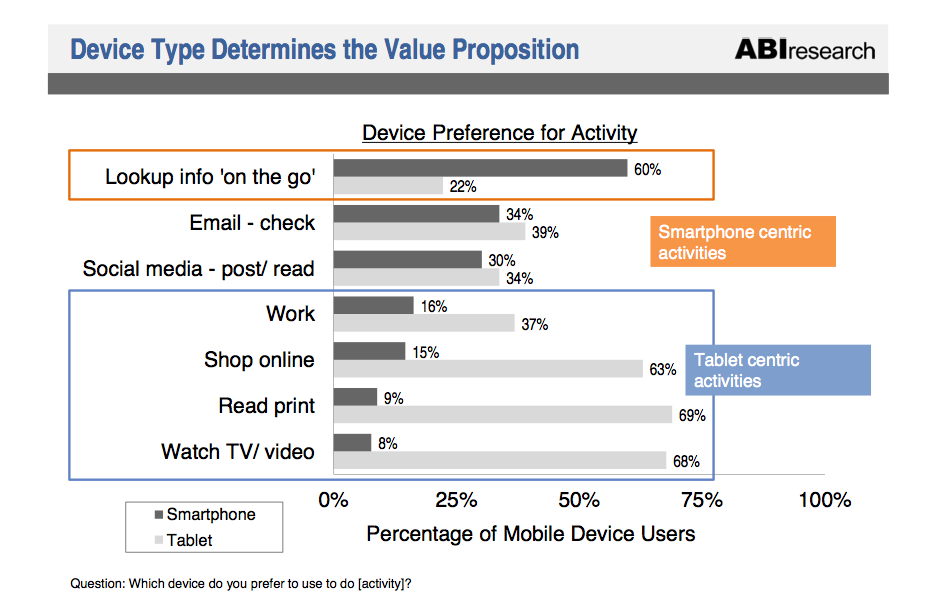 You can see that the tablet actually scores pretty high especially in long-form, lean-back activities like reading and watching TV/video. The numbers in those — 69 percent and 68 percent respectively — are especially stark compared to the numbers on smartphones. The only category in fact where smartphones outscore tablets for usefulness is for on-the-go activities — no surprise, since they are more portable and tend to have cellular connectivity when most tablets do not.

Context is king. This could be the mantra for the mobile ad industry, judging by ABI/IAB’s survey, which found some common ground between smartphone and tablet users when it comes to what kind of ads work the best: those that are “contextual” are thought of as the most interesting (slide 38).

The top three categories for mobile ads, as ranked by respondents, were the same across tablets and smartphones, although their rankings differed. They were coupons related to things users were already browsing;  ads for products that were already being shopped for; and favorite brands (again possibly related to your browsing activity).

That not only says something about how people are possibly more receptive to ads when they’re already in a “buying” state of mind; but also underscores other research that has found what effective devices iPads (and potentially other tablets) are for shopping as well.