To say that 2012 is make or break for Microsoft would be an understatement. The typically quiet and somewhat boring juggernaut has been on a roll as of late with the announcement of the Surface, Windows Phone 8 and the end of the year roll out of of its flagship Windows product, Windows 8. Today’s press conference in San Francisco is no different with the introduction of the next generation of Office.

Armed with a Samsung Series 7 tablet running Windows 8, I’ve been testing out a build of the new Office for close to a week. While it might not be as sexy as most every other product in the lineup, Office makes up a huge portion of Microsoft’s revenue and it’s something that clearly needs to be protected. But let’s clear up the different versions of Office and why it’s not just being called Office 2013 or even Office 15. Here’s the breakdown straight from the horse’s mouth.

The following are some impressions of the new Office based on a build run on a tablet and not the final consumer version. Also, this is coming from someone outside of an enterprise environment. We don’t use Outlook at TechCrunch, so I’m completely removed from Office products. There may be some instances of things that I find new or unique that might actually exist in current versions of the product. Forgiveness, please. (Side note: Dear AOL/TC powers, please migrate us over to Outlook.)

A plethora of input methods are at your disposable with the new Office, including your phalanges, a stylus and even the traditional keyboard and mouse combo. There’s also a touch keyboard for those using a tablet. All of this can admittedly turn into a bit of a cluster, so I opted to stick with one input method for various trial runs with the software. Input methods aside, the largest hurdle for me was learning all of Microsoft’s Windows 8 gestures. Though it’s a bit weird but makes total sense, you can switch between input method modes for touch or a more traditional desktop mode.

The dreaded Ribbon is still around but it’s mostly hidden unless you really need it.

Lync is still the default means of communication between users but Microsoft says Skype will soon be integrated for contacts and chat. Yammer is still TBD as the deal hasn’t yet closed. You’ll be able to “peek” at your schedule without having to switch between your email and calendar. People cards collect your contact’s info in one place reducing redundancy and multiple email accounts can be accessed from Outlook. 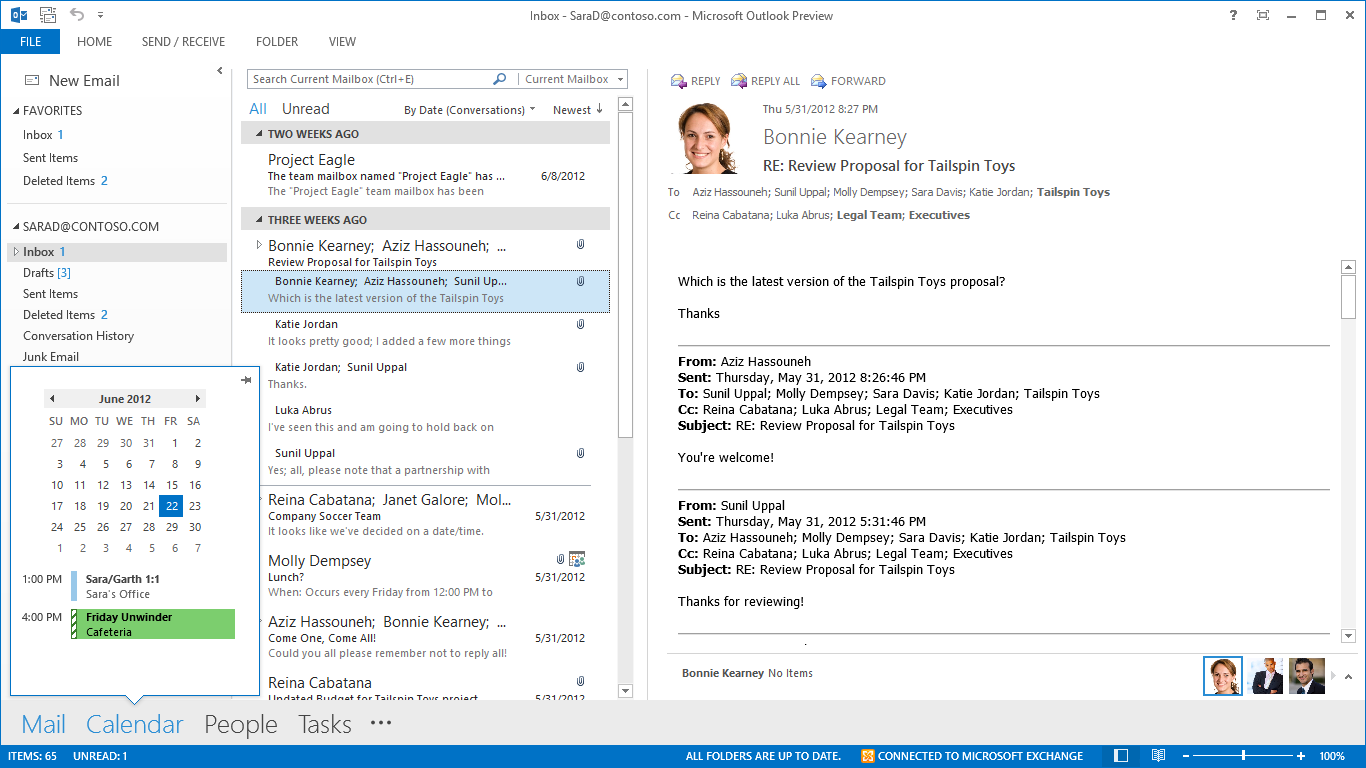 Another clever feature is MailTips, which notifies you of missing attachments or whether someone is out of the office. And for the security hounds, it lets users know when they’re sending info to users outside of their network. There’s an even a weather bug!

The most notable new feature in Word is the ability to import and edit PDF files. Yay! You can store docs over SkyDrive or SharePoint but what’s really neat are that settings and edits (duh) roam with you wherever you are and you can pick up where you left off on a doc even if you switch between devices. Another new feature called simple markup slims down the track changes in a more digestible view. Web apps now support track changes, too. You can also switch between modes for both reading and editing views.

I’ll have to get back to you on this one but there are live previews for charts that pop up when hovering over a data set, for instance.

Not the biggest user of PowerPoint, so I’ll have to get back to you on this one as well. One notable feature is the presenter view, which gives you, the presenter, the ability to navigate forwards and backwards within your deck without the audience knowing. You can also zoom into dense slides to highlight specific areas that you want your audience to see.

“Inking” is a feature within OneNote that lets users make handwritten notes on the fly with a stylus, finger or mouse. 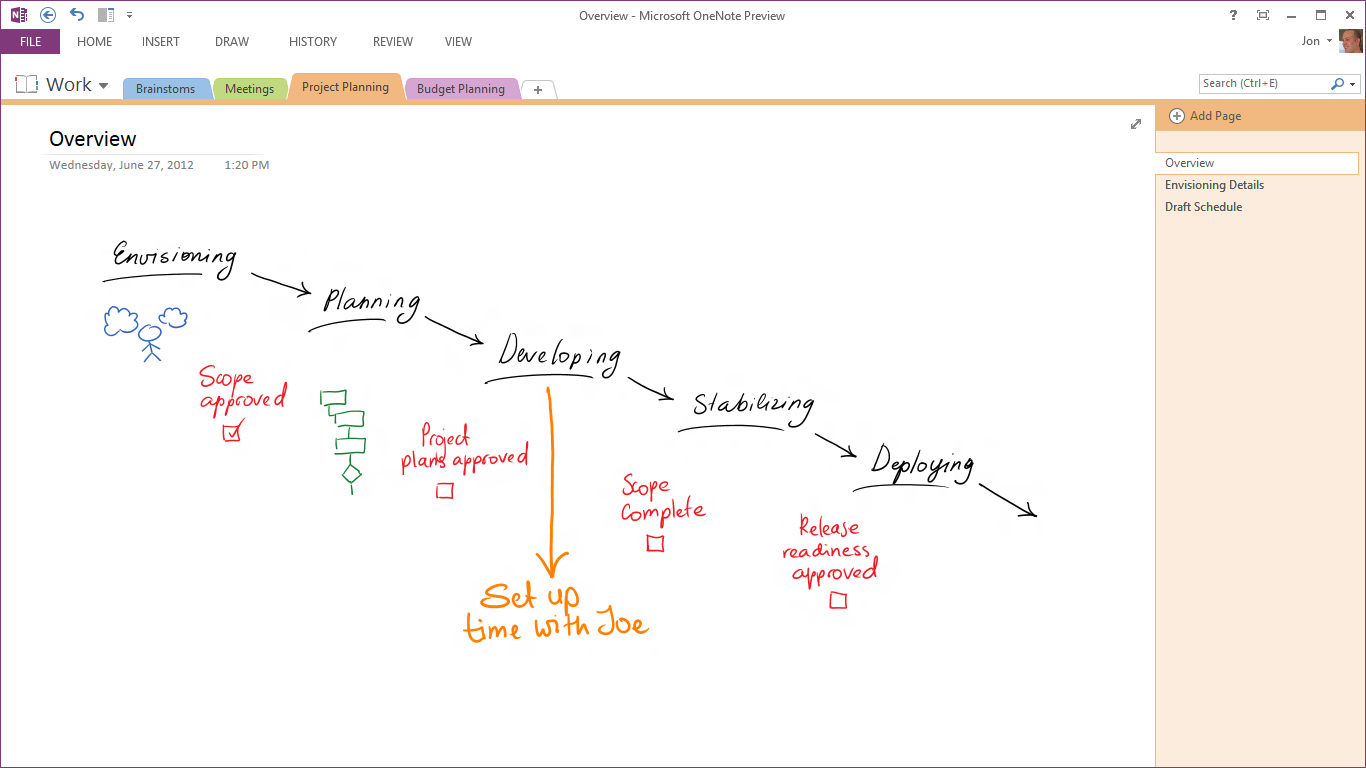 Social appears to be a focus of the new Office. Users can link their Facebook and LinkedIn accounts much like you can on Windows Phone 8 with feeds being streamed in. Microsoft says they’ll open up the API for developers to pipe in other social network content.

Microsoft’s approach to apps for Windows 8 is still a bit murky. But there are signs of some clever ways that apps are talking to each other within Windows 8. While checking Outlook I noticed that the program recognized an address embedded within the text of an email that then prompted me to launch Bing Maps. Pretty clever indeed but it’s unclear if that’s how it will actually work in the wild. Unfortunately, Microsoft wouldn’t comment on how users might find new apps without going into the app store. Personally, I’d be okay with Outlook crawling my emails for specific keywords or combinations if it unobtrusively offered up apps that I might find useful. Even just an option for that type of functionality to be turned on or off would be great. 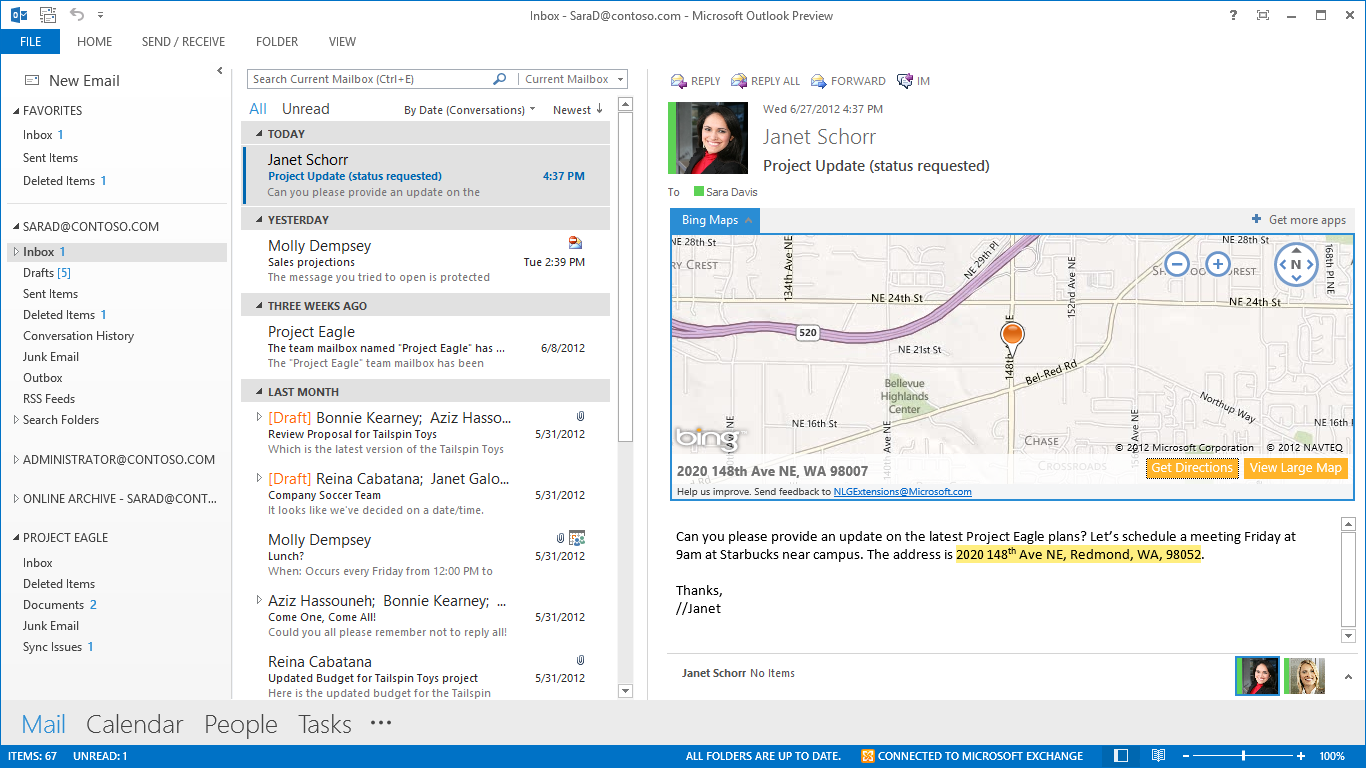 There’s a lot left on the table before Microsoft releases Windows 8, Office, Surface, Windows Phone 8, etc. and it’s unclear how all of the above will play together. For instance, what type of Office 2013 functionality will be natively built into Windows Phone 8?

Again, this is a preview of an unfinished version of Office. If you have any specific questions, please feel free to ask in comments and I’ll do my best to test and respond.