Here’s a common problem: you notice an awesome article, video, or song in the Facebook news feed but there’s no easy way to save it for later. So while Facebook only bought the talent and not the tech behind Spool, a content caching service, I bet within a few months they’ll help Facebook launch a news feed button for saving external content to the web and your mobile device.

It could even be the basis for a standalone Facebook news feed app. Here’s how FaceSpool could work.

Before it was shut down the day Spool’s whole team got acq-hired, I used Spool every day, and I loved it. Similar to Pocket (formerly Read It Later) but unlike Instapaper which only handles text, I didn’t have to worry what form of content I’d discover, Spool could handle it. 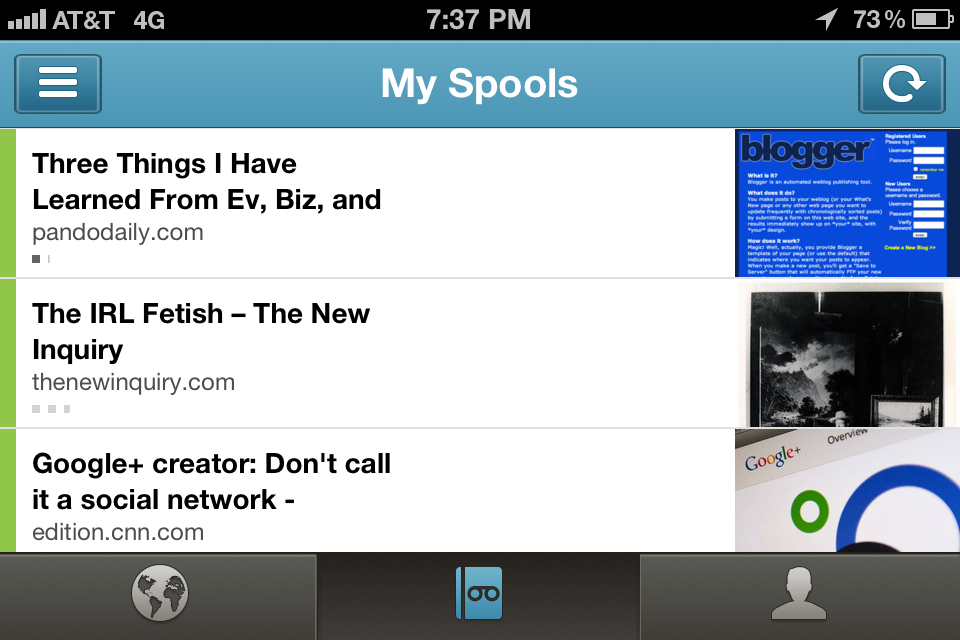 While busy working on my laptop I’d come across an article or video with an intriguing title or a friend’s recommendation, and rather than banish it to my bookmarks I’d click my Spool bookmarklet so it’d be downloaded to my mobile device for on or offline perusal. I’d then plow through my saved Spool content before going to sleep, on the bus, while offline waiting for a plane to take off, or yes, even in the bathroom.

Other times I’d discover something great on my phone when I only had a few moments free, wanted to keep feed reading didn’t feel like waiting for a video to load, or didn’t have headphones handy to be able to listen up, so I’d want to save it for later. I could copy the link and open Spool which would automatically ask me to save that link.

These use cases come up for all 900 million people who use the Facebook news feed. In fact, that’s where I found most of what I’d Spool. Thankfully, Spool created a Chrome extension that would stick Spool buttons next to any Facebook news feed story containing a link. It’d also do the same for Twitter, Google+, Quora, and even Techmeme. Then suddenly Facebook bought out the Spool and those buttons stopped working.

As GigaOm’s Om Maliks notes, Spool had built an impressive “media-distribution network using servers and caching media content in various data centers”, and its infrastructure expertise could benefit Facebook. Beyond a user facing Spool-style product, there’s a number of ways the team could be put to work.

Spool could determine what was behind a link, and sort the garbage from the actual content. That tech could help Facebook ensure the blurbs it automatically shows beside links pasted into the news feed always show content that will entice people to click. Facebook’s ability to generate those clicks is key to its argument that publishers should build and advertise on the social network.

Knowing what’s behind links could also help Facebook understand how relevant a link is. Did the video get a lot of views? Is this a long article someone would be more likely to read in the evening than at work? Facebook could even create its own version of  Twitter’s expanded tweets, where news feed link stories could be expanded on the web or mobile to show a deeper preview of their external content than is displayed today.

Facebook has no “read it later” option. There’s the Like button that’s predominantly for showing approval to friends, and subtly for improving the feed’s quality. However, news feed post Likes usually don’t even show up on your profile timeline, and if you dig into your Activity Feed privacy control center to find one, on mobile it’s just listed as “Josh likes a link” with no title, blurb, or thumbnail.

But “read it later” is a gaping hole in the Facebook product as a content discovery service, and one I have little doubt it will fill with Spool.

It acq-hired the full five-person team, and with Facebook’s engineering resources they can undoubtedly rebuild the consumer product that got left out of the deal. Facebook may have already been building a solution to the content saving problem, and figured there was no need to buy Spool’s version when its own was in the works.

There’s a few ways I imagine a FaceSpool product coming together:

The simplest form would just be a better way to access previously Liked links. Essentially it’d be a Spool reader-esque interface within the web and mobile apps that was populated with your Likes. This means Facebook wouldn’t have to add a confusing extra button and bloat the decision making process of “Should I Like? Like and Share? Spool and Like?”

If Facebook wanted Liking to retain its current identity, it could add an additional Spool button to all news feed posts. Of course Facebook prefers generic terminology, so it’d be more likely to launch as a “save” button.

A dedicated save button would give Facebook an extra-strong signal that you were fascinated by a piece of content. It could also auto-share news of your saving activity, and sell publishers Sponsored Stories ads based on the activity the same way it could with Like-based saving.

Now this is a little crazier but stick with me. Facebook already has dedicated standalone mobile apps for Messenger and Camera (photos). The next most popular Facebook feature is surely the news feed.

The Spool concept could underpin a standalone “News Feed” app that works in tandem with a Like or dedicated button-based saving. It could let you read updates from friends, use an advanced publisher for sharing new content, and access your saved links.

When you finished consuming content shared by friends, Facebook could let you snap back to the original news feed story to leave Likes and comments. You might also be able to easily see what content friends have saved and what they’re consuming right now so you could jump into a semi-synchronous experience and then chat about the media afterwords.

Of course, the news feed is already the home page of the primary Facebook app, but it could be augmented with more content discovery features that would be great on mobile where search is clumsier than browsing. Imagine trending links or personalized feeds of recommended content such as news, humor, videos, or music, all which could be saved for later consumption.

To Cache Or Not To Cache 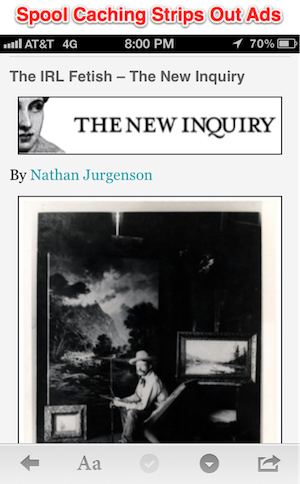 Unfortunately, one big difference between Spool the startup and Facebook the public mega-company is that Facebook doesn’t have the freedom to make as many enemies.

Spool would strip content clean of ads and deliver it within its app or web interface, diverting traffic and dollars from web publishers who made the content. Facebook relies on the huge traffic and ad impressions it delivers to third-party websites to keep them branding their properties with Facebook plugins, building Facebook-integrated apps, and buying Facebook ads. Publishers might get pissy if it started caching their content.

Without caching, content wouldn’t be available offline, which would make for a worse FaceSpool experience than Pocket. However, times we lose connectivity are fewer and farther between, as subway tunnels get 3G, planes get wi-fi, and rural areas get better coverage. Accessing saved content through a Facebook banner-overlaid mobile browser wouldn’t be so bad.

If it didn’t cache, Facebook could pre-load links occasionally or as soon as you open the FaceSpool mobile interface. Hell, it could even show Sponsored Stories or other ads while you wait for articles to load.

Either Way, We Need Feed It Later

Apple and Google are trying to take control of this space: Apple more directly through Reading List, and Google less directly through Chrome browser with bookmarks synced across devices. But both of those thrive on links shared through Facebook, and the social network shouldn’t let them steal its engagement and data.

Facebook is the new town square, newspaper, Yahoo, and Digg — the way we discover and discuss what’s happening in the world. That discovery is so addictive that we skim Facebook even when we don’t have time to consume what we find. Plus, the tone isn’t consistent the way Path is and we’re constantly frame switching between the interest content we’re inclined to save and the personal / social updates about our friends’ lives.

The future of Facebook’s business is in becoming the omni-news feed that sucks in content from everywhere, filters it for relevance, and serves it up in one place alongside ads. The company’s adding more and more ways for apps to send it content. By weaving Spool into the news feed, Facebook will make sure all us content junkies are just a click or tap away from from our next hit of discovery.