An API is a “must have” feature for many tech startus. Mailchimp CEO Ben Chestnut went so far as to write that the company’s API is “probably the best marketing we’ve ever done.” But for some companies an API is more than just marketing, it’s a core part of the business. As more business shifts online, non-technical business people will need to make strategic decisions about technology, including integrations with third-party sites via APIs. More tech companies should try to demystify their offerings.

Online payments company Dwolla is moving in the right direction. Dwolla allows people to make and accept payments online. Unlike PayPal, Dwolla routes around the traditional financial infrastructure. As a result, the company offers a transactions at a lower cost than credit card processing companies. In order to accept Dwolla payments online retailers need to integrate the service into their websites. This can be as simple as pasting in a snippet of HTML, but for more complex shopping cart systems the integration needs to be done via the API. Since Dwolla is targeting practically any type of seller it’s safe to assume that many of its potential customers don’t have a developer on staff dive into the API documentation. Dwolla needs to be able to explain to key decision makers what its service is capable and not bogged down in technical details.

Last week the company relaunched its developers portal to make it more accessible to non-technical people. It’s still at developers.dwolla.com, but it’s now called the Integration Portal. “We kept calling it a ‘dev site’ but we realized that if we really wanted to democratize the site we’d have to call it something else,” says Jordan Lampe, director of communications at Dwolla.

The site then lays out the different ways that businesses can take advantage of Dwolla: 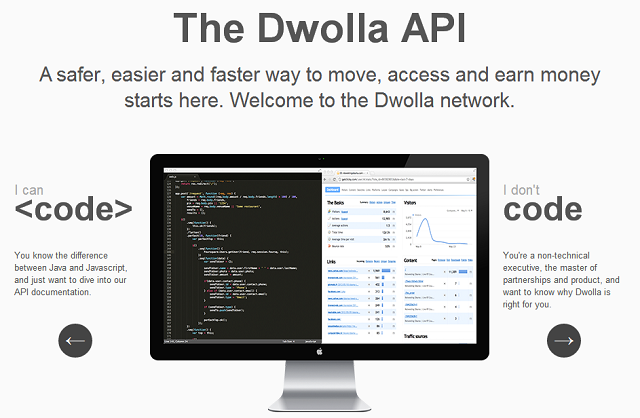 API evangalist Kin Lane praised the move on his blog, writing “While actually integrating with your API might be a technical endeavor, much of the business decision around using your API will most likely be made by a non-developer.”