Copious, a San Francisco startup that makes an online marketplace where people can buy and sell things, has raised $5 million in Series A funding.

The new round was led by Foundation Capital, with Google Ventures and Relay Ventures participating — all three firms had invested previously in Copious’ $2 million seed funding round that closed in the spring of 2011.

We were pleased to sit down with Rose here at TechCrunch headquarters for an interview all about the new funds and how Copious views the competitive landscape with large players such as eBay, Craigslist and Etsy, and new sites such as Threadflip in the mix. You can watch that in its entirety in the video embedded above.

Copious, which launched in beta to the public in June 2011, essentially functions as an eBay-like marketplace for people to buy and sell new and used items. It is set apart by its socially-savvy backbone — you have to connect your Copious account to either Twitter or Facebook — which allows people to more easily vet the users with whom they’re doing business, and identify others with similar styles and tastes. 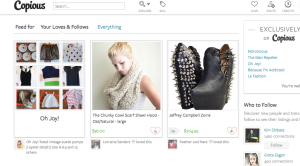 According to Jim Rose, Copious’ co-founder and CEO, things have been going well. The site has hundreds of thousands of users, and its main demographic is women between 18-40, which is certainly a lucrative space when it comes to retail.

The company plans to use the new funds to build out its team, which currently consists of 12 staffers, build out its feature set and demographic base, and work on eventually expanding its reach to international markets.