Fashion — as the saying goes — never goes out of style, and that basic idea is bringing a rush of investment to online startups that want to hook into the colliding worlds of clothing and consumerism with an engaging social twist. One of the latest is Chicisimo — a social media site for fashionistas to post and vote on pictures of their latest looks, and then buy the look for themselves — which today is announcing that it’s picked up a seed round of $800,000 from a list of angel investors including VitaminaK, a backer of another e-commerce upstart, Alice.com.

The news comes as Spain-based Chicisimo exits a long stint in beta mode, which saw the site over the last two years expand to cover seven languages — Italian, German, French, Polish, Portuguese, Spanish and English. Chicisimo currently has 127,000 active users, with the average time spent on the site per user at 11 minutes.

Chicisimo — Spanish for “super chic” — is playing on two ideas that are very trendy at the moment: the surge in consumers looking for visually-driven fashion content online, spearheaded by sites like Pinterest, the Fancy, and Polyvore, but also many smaller players focused specifically on clothes; and the rise of e-commerce sites driven by social recommendations and curation — which at its heart is a big dat/algorithm play. There is some pedigree here, too: Chicisimo’s co-founder, Gabriel Aldamiz-echevarria, had previously been a VP and member of the board at Strands, which develops personalization and recommendation software that powers social sites like these.

In addition to posting pictures of outfits, users can vote for those it likes the most; share the looks they like on sites like Pinterest, and even buy related items. It also lets brands design their own “flower” badges, which get awarded to users who wear those brands the most. In addition to organising looks by users, you can also search by designers, most popular trends and specific articles of clothing (eg “jackets”).

Chicisimo’s tagline is “real fashion on real people,” and the idea is that the content is generated by everyday female users. But like a lot in the fashion industry, that idea on first glance seems like somewhat of an illusion: just about all the women are long and slim, and the pictures don’t exactly look like snapshots. [Update: A Chicisimo spokesperson insists that they are authentically snapped by the users. “They key here is that Chicisimo is a community for fashion bloggers, and they really pay attention to the details of the look and to the quality of the photos. The average user is a high quality fashionista who invests time in getting dressed and buying clothes.”] 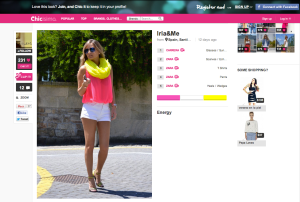 This is actually one of the unique selling points on the site and points to how Chicisimo may develop its business in the long run. Aldamiz-echevarría, who co-founded Chicisimo with his wife, notes that the “high-caliber community of fashion-forward women” who post “hundreds of artistic photos” daily make this site attractive not only for other fashionistas (including some who are perhaps not as stunning), but for the wider industry, which can use the site’s ranking systems “to see which brands and items their customers are actually wearing (and not just buying).”

There is also the fact that the company is exiting its beta with an already-international footprint. The U.S., it says, is its key market, but it also has a substantial number of posters from Europe who are a “great source of fashion inspiration and diversity,” says a spokesperson.

Chicisimo knows that it’s in a very crowded space, and so it will be using its angel funding to drive more users to its sites in a bid to scale up.

From today it’s also launching a few new features to help further engagement: these include the ability to create sets of clippings around particular trends; and a new recommendation tool, “New Idea to Wear, Each Day.” These will be chosen from those user-generated clipped sets and will focus on a new trend daily.