When it comes to revenue generation, online advertising may still be one of the smallest of all ad mediums, but it remains the fastest-growing, outpacing other non-print formats like TV, radio and cinema — as well as printed advertising formats like newspapers and magazines. New numbers out today from Nielsen, covering Q1 of this year, indicate that advertisers are spending 12.1 percent more on Internet ads than they were a year ago, with Internet the only advertising medium that saw double-digit growth in the quarter.

Of the seven categories covered in Nielsen’s Global AdView Pulse report — television, radio, outdoor, newspapers, magazines, Internet and cinema — magazines were the only medium that saw a contraction in ad spend over last year, going down by 1.4 percent. All of the rest were buoyed by a rise in consumer confidence and a redoubled effort from brands to connect with the masses.

In an inverse variation with Internet advertising, TV had the lowest-percentage growth of the lot, but it remained the biggest advertising revenue generator overall, Nielsen said.

Nielsen did not provide any hard numbers for what these growth percentages represent, but to give you some idea of what kind of figures are in play, research from WPP’s Group M earlier this year predicted that in 2012, Internet advertising would be worth $98.2 billion worldwide, representing 16 percent of all advertising spend. 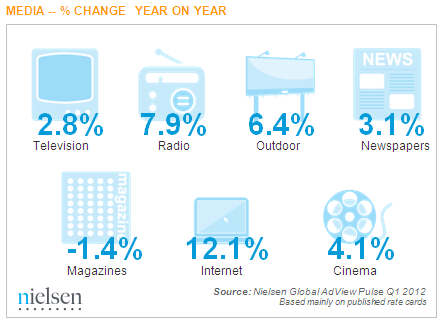 In this report, Nielsen broke out how different regions were performing across the various media categories; as a general rule, it looks like developing markets are continuing to grow at a faster pace than more saturated, mature regions.

That’s provided some striking contrasts in some categories: in TV ads grew by four percent in North America; but in the Middle East and Africa, they grew by 33.8 percent.

Similarly, online spend grew nearly three times as fast in the Middle East and Africa (35.2 percent) as it did in Europe (dead-on average at 12.1 percent).

Although in China we are seeing an increasing catalog of premium film content come online, for the most part, as we noted yesterday, film revenues are coming in the form of cinematic releases. No surprise, then, that cinema ad revenues are also continuing to grow really well in the region overall: they were up by 27.1 percent. Nielsen noted that this offset declines in Latin America and the Middle East. The full map with regional break-outs is here: