Berlin-based Foundd is a new movie recommendation service launching this week, which not only finds you movies you would like to watch, but also helps a group decide on a movie they can watch together. It’s an interesting twist on the concept of personalized recommendation engines, like those created by Netflix or Amazon, for example, which seemingly presume that watching movies is a solitary experience. While that’s sometimes true, you’re just as often watching movies with family or friends…and arguing about what to watch.

Married people, you know this one, I’m sure. Or anyone who watches movies with friends, each with different tastes.

The way Foundd works is that it presents you with a short “getting to know you” quiz where you rate a handful movies on a one to five star scale. Then it prompts you to add your friends. If you signed up via Facebook or Twitter, you can just pick them out from the list provided. Each group watchlist can have up to five members, which seems a little limiting for larger families or groups, but I suppose it’s a start. 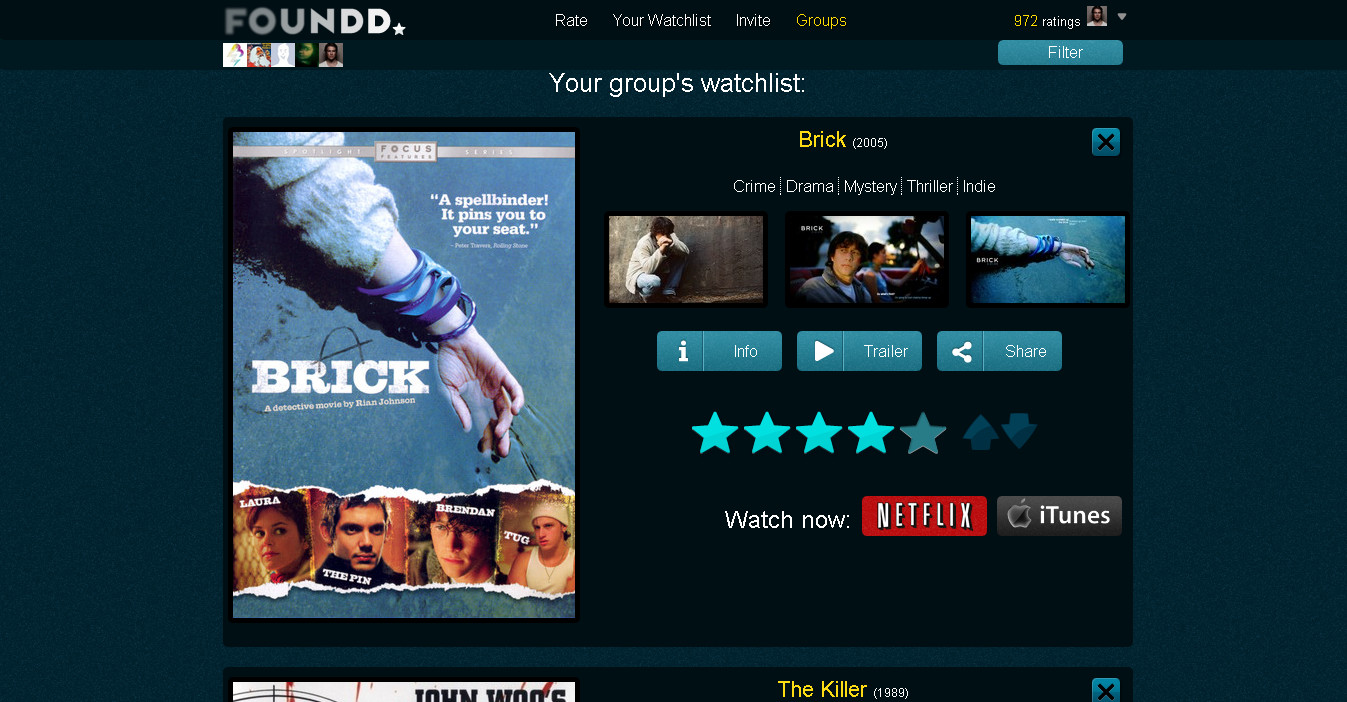 The site feels a bit rough around the edges, and I wish it was available in app format, but it works. And the recommended movies presented in my watchlists were decent choices, from what I could tell from a first glance. It needs a “Add to Queue” button for Netflix users, though.

Of course, big companies have put a lot of work into their recommendation algorithms. Netflix famously even hosted a contest which awarded developers with $1 million to improve its algorithm by 10%. Despite the improvements in this space, finding new angles and methods for better recommendations is still a hot businesses (and especially in the mobile apps space). TechCrunch recently covered Tipflare, for example, which does Netflix-like recommendations on anything. eBay acquired recommendation technology Hunch in November. A ton of companies are working on recommendations around video and movies. But the idea to match up personalized recommendations within a small group is still somewhat novel. And handy.

Foundd’s technology may not be on the same level of Netflix, but that doesn’t matter, explains Foundd co-founder and CEO Lasse Clausen. “Netflix has put a lot of effort into predicting how much I’ll like every one of their movies,” he says. “But as a user, I don’t really care whether I’ll dislike a movie with 2.3 or with 2.35 stars, that doesn’t help me find a good movie. Foundd focuses on giving more accurate predictions over a smaller number of movies and those that the user will really like.” He also notes that Netflix’s recommendations are limited to its own catalog, while Foundd’s can work across multiple catalogs, and, in the future, across multiple products (games, books, internet video, apps, etc.)

Founded in January out of frustration with finding anything good to watch, Clausen teamed up with Benjamin Metz, Christian Riedel, and Peter Mådel to create the service, which is currently being bootstrapped.