Over the last several months, we’ve seen a slew of casino game launches from indie developers to the behemoth in the room, Zynga. The issue is that while it’s easy to create a casino-style game, it can be difficult to monetize one because of very fragmented and complicated regulations around online gambling globally.

While Betable’s technology can’t work in the U.S., where online gambling is restricted, it can work in other countries like the U.K. Betable has gone through the trouble of obtaining the necessary licenses in big markets in Western Europe and parts of Asia. All told, the company’s chief executive Chris Griffin says those international markets make for a $32 billion online gambling market, compared to the current $3 billion social gaming market.

Betable’s platform identifies which players they can legally show gambling-like features to based on their location or jurisdiction. So a developer that integrates Betable shouldn’t be concerned with exposing gambling mechanics to U.S.-based players, for example.

He believes there’s a big opportunity because traditional gambling companies haven’t caught up with the last five years of development in the free-to-play and social gaming world. Some companies have stepped up, like Caesars, which acquired Slotomania-maker Playtika last year.

“They offer the same games people were playing 300 years ago,” Griffin said. “Game developers can bring creative new user interactions. It doesn’t have to be a slot machine, or blackjack. It can be anything that has an element of chance. It could be player-versus-player. It could be betting on real world events.”

The company’s in private alpha with 30 developers at the moment and they’re not disclosing the revenue share just yet.

One other benefit of gambling-style games is that they tend to monetize far better on a per user basis, bringing in $1,800 in customer lifetime value versus $2 for social games, Griffin said. Online gambling businesses may also face lower tax rates in the 15 percent range, compared to normal business taxes as international territories compete on having the loosest regulations to attract companies.

The issue for most developers is that it’s very painful to go through and get gambling licenses in all of these territories. The wait can be 18 months long, no matter how big a company you are or how much money you throw at lawyers and the problem.

Betable acquired all of its licenses during the original incarnation of the company, which Griffin called “a stock exchange for betting where the odds were user-generated.”

“We had the best lawyers, and even with all of these guys, it still took us two years to get our licenses,” he said. “Even if you execute perfectly, it’s probably still going to take you 18 months.”

In the process of getting those licenses, Griffin said he discovered this opportunity to be a platform for social games that integrate gambling. He pivoted, bought the old investors out and recapped the company.

How did Griffin buy his old investors out? “With a lot of skill,” he said, declining to reveal more. It’s worth noting that the company’s original lead Atomico Ventures, did not participate in this round. The company has offices in London and San Francisco. 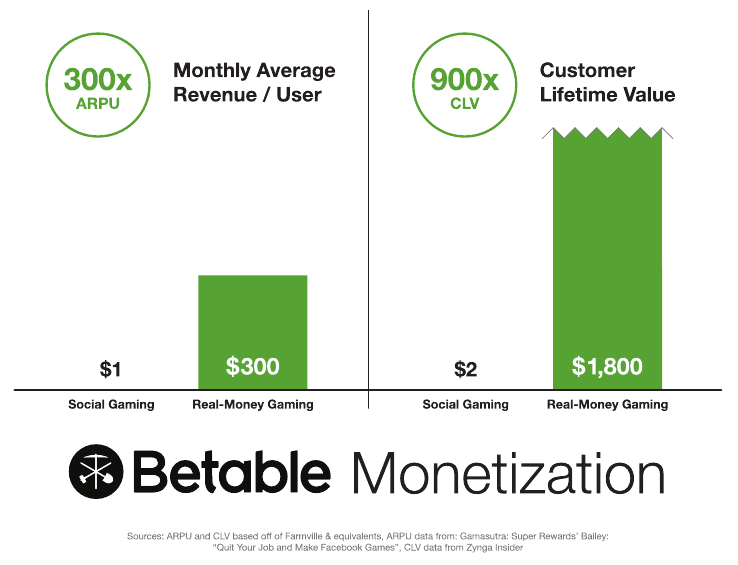