One more update on this week’s “app-ocalypse” – Apple says it has resolved the issue which caused iOS and Mac apps to crash upon launch, and it has now pushed out new, untainted updates to fix the previously corrupted apps.

But in developers’ minds, the bigger worry here had been what to do about all those angry, one-star customer reviews related to crashes which were not their fault? It seems Apple is taking care of that, too.

According to the developers we’ve spoken with, the one-star reviews are not actually being removed from the iTunes App Store, they’re just being hidden. There seems to be some confusion on this point, however. For example, the folks at Readdle, makers of the Scanner Pro, blogged about the situation, noting that “Apple has decided to remove ALL comments of corrupted apps on the App Store, since many of those get 1-star ratings from angry users.” 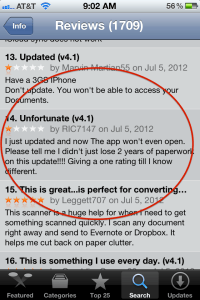 But when we pointed out to Denys Zhadanov, Readdle’s Marketing Manager, that there are still many negative reviews remaining in plain sight, he agreed, saying that, he thinks what has actually happened is that Apple has relocated those reviews off the app’s main page. You can’t see all the bad comments people left because of the app crashes unless you click on “All Versions” in iTunes and scroll down, he says.

We should point out that this is only the case in the iTunes desktop software. In the mobile App Store, you can simply tap on “More Reviews” and scroll down to find the negative rants from angry customers (see photo on right as well as other examples here and here and here). We’ve checked into several of the affected apps this morning and were still able to pull up reviews with one-star ratings related to the app crashes – so, no, they were not removed entirely.

While it’s not fun for developers to see negative reviews for a problem that they were powerless to fix, it makes sense to not wipe out all the customer reviews that came in while the issue was occurring. As Readdle’s blog post points out, some of its users installed an uncorrupted update and left good reviews – and they didn’t want to lose those, they said.

Instead, it appears what Apple has done is to take away the impact of the one-star ratings. The review’s text remains, but the one star will no longer lower the app’s review average. Here’s how Joe LeBlanc of Metronome+ explained it to me this morning: “there are two review averages that iTunes tracks, your all-time average and the average for the latest release only. In the App Store, they initially show the all-time average upon a new update release, but when the app has gotten five new reviews, they show only the average for the latest release.”

He says that when Apple pushed out the updates for all the affected applications, it had the effect of “resetting” the review average. In other words, the one-star reviews don’t disappear, but their effect on the all-time average has been somewhat mitigated by the forced update process.

One developer tells us the same resolution hasn’t yet occurred in the Mac App Store, but he suspects that’s because Apple is taking care of the iOS App Store first.

As for developer sentiment, it has been across the board. Some says they think Apple handled the situation well while others say the experience has been “miserable.” Just remember folks, Apple is not infallible.