The Google+ project is changing Google. Watching the keynotes at I/O this week, it was hard not to notice how Google has become a company that doesn’t just want to catalog the world’s information anymore. The company has decided that it wants to be “delightful,” that its products should have a touch of “magic” and that just giving us ten blue links isn’t enough anymore.

This new, more emotional Google, was in full display this week as the company pulled off what is likely going to remain the most spectacular tech demo ever given for quite a while. When Sergey Brin asked the audience on day one if it wanted to see a demo of Project Glass, few people knew what they were in for. I expected Brin to maybe host a little hangout from its glasses, show off what the interface looks like, or maybe show a canned demo of using Glass for navigation. That probably would have been enough to whip the 6,000 attendees into a frenzy. 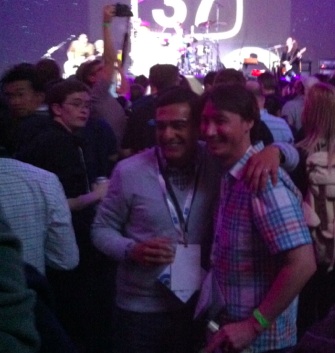 But Brin had bigger plans. He stressed how its hard to demo Glass because the audience can’t feel what it’s like to use it, yet. So instead of canned demos, we got the most elaborate and risky stunt Google (and maybe any tech company) ever attempted in a keynote. We got skydivers, mountain bikers, people rappelling down the Moscone Convention Center and an audience that actually looked up from its phones and keyboards to take it all in. Glass, he said at one point, is about capturing those “fleeting moments” that are otherwise lost.

Earlier in the day, Google spent a lot of time talking about how he wanted the next version of Android and the Nexus Q media streamer to be a “delightful” experience (the early reviews indicate that it isn’t quite there yet) and how the company designed the “party mode” to make events more social.

Vic Gundotra – whose emotional blog posts don’t need any further introduction – introduced Google+ events as a tool that can help people get together and preserve the photos of their get-together so they can relive them afterwards (though seeing him dance alone to Train when he wasn’t posing for pictures with friends at the what was basically his After Hours party left me with a few mixed emotions myself).

It’s hard not to think that a lot of this talk about emotions at Google stems from the Google+ project and the group that’s in charge of it. The same kind of language used in the keynote, for example, permeated a fireside chat with the Google+ platform team, where the argument against just opening up a full read/write API was based on the fact that Google doesn’t want to “disturb something magical.”

For now, though, it’s a mixed bag. The Nexus 7 shows that Google is on the right track. It is actually really “delightful” to use. The hardware, with its soft plastic in the back feels right. Android 4.1 feels like a competitive OS and there is some whimsy in Google Now, too, with its themes that change depending on where you are and what time it is (though Now is also a bit creepy, given that it reveals how much it – and hence Google – knows about us).

But the Q’s Party Mode, the feature Google spent the most time on during the keynote. That just doesn’t sound like a good idea and maybe it’s no surprise that the Party Mode demo felt off, with a stilted and canned dialog that didn’t quite fit into the tone of the rest of the event.

Google+ events, of course, turned out into a bit of a disaster in its first day, because people flooded their friends with invites to test events (Google apparently never considered this scenario).

I’m a bit worried then that Google is focusing a bit too much on something that isn’t its strength. It’s a company that was built on hard-core engineering and algorithm. This new and softer side of Google sometimes feels just right (Brin’s skydiving demo) and sometimes just plain wrong and forced (the Q’s Party Mode) and like it’s holding the company back (no full API for Google+).