Oh yes, the social media food humor is rolling in — eat it up, people. According to Twitter’s real-time search, Instagram being down, as a result of an Amazon Web Services storm-related incident, is unleashing a cornucopia of Instagram-related food jokes, at a rate of about one every couple of seconds.

They’re a little cheesy (sorry!) but do underscore just how much the photo-sharing app is used (or, least how much it’s used by the kind of folks who also take to Twitter when they have an issue with the world). And how much it’s become a part of life’s everyday small events, perhaps more than any other social media app.

According to Twitter, the most-tweeted Instagram-down-food joke so far comes from Jason de Plater (and I love that his name even has a food pun in it! how cool is that?), with currently over 5,000 tweets.

#instagram is down due to a thunderstorm wiping out their servers in Virginia. You can still drink your coffee and eat. It tastes the same.

It’s a nice example of how something can go viral on Twitter: de Plater currently has less than 1,000 followers, compared to over 13,000 for a guy who has penned another popular Instagram-food-down tweet, Nicholas Austin Maroney, aka @YourFavWhiteMan, currently at nearly 3,000 tweets.

Yes, there are thousands more like it! Including a nice meta-jibe from our resident hilarious comedienne, Alexia.

Twitter's down. Where am I going to joke about not being able to Instagram my food?

Others are trying to advance the joke a bit: 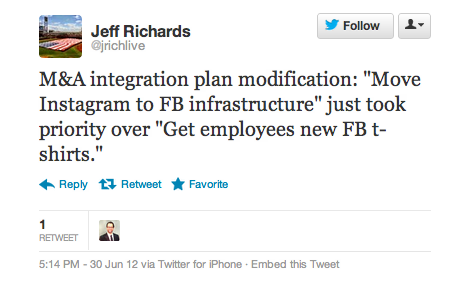 Gotta love a VC who’s thinking like a chess player, a couple of steps ahead of the crowd.