Google+ Events, Google’s alternative to services like Evite or Facebook’s Events, was announced at this week’s Google I/O conference. And it immediately went viral…but not in good way. You see, Google made a slight miscalculation in terms of the Events’ privacy settings. (Insert joke about Facebook envy.) By default, other people have been able to “invite” you to events, and these automatically showed up on your Calendar – even if you had not yet confirmed that you would be attending.

The result? Some users were getting invited to dozens upon dozens of unwanted events from people they barely knew. In the case of more popular users, they were inundated with hundreds of requests from their wide audience of online friends. The good news is there’s a fix for this in the works, and another which you can implement right now. 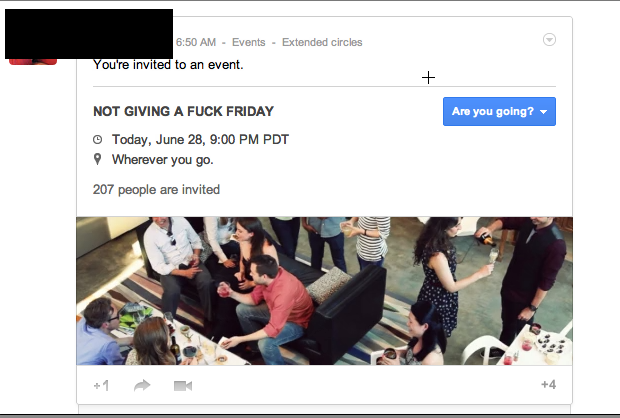 It’s too bad that Google+ Events got started on the wrong foot like this, because the service had potential to be useful. One of the nicer features about Google+ Events, in fact, is its ability to integrate with your Google Calendar. It’s not often that Google integrates its services so seamlessly – case in point: those awful widgets on the left side of Gmail for Calendar and Chat. Really? It’s 2012 and we’re still using widgets? But I digress…

However, in the case of Events, Google went just a bit too far with its integrations. Immediately, people began adding others to Google+ Events right and left. Yes, some of it was just to experiment with the service, sometimes it was a joke, other times it was for “marketing purposes.” But yikes, the notifications really started to add up. Google just allowed people to spam each other’s calendars! News flash to Google: our calendars are our own and we should be the ones in control of it.

One of the more high-profile cases was that of popular G+’er Wil Wheaton who made a public stink about the situation, and now reports that Google has responded and will be taking action. According to his post, Google+ SVP Vic Gundotra replied to Wheaton’s complaints, saying:

We are doing exactly what you requested. We should have contemplated and anticipated how people would abuse this and how painful this could be for celebrities with large followings.

We have pushed a number of fixes yesterday (some were bug fixes that showed up at scale). Expect more fixes today. Sorry for the trouble Will.

There has been some confusion on who can add you to an event. Wheaton says, quote: “To be clear: People who I have in a circle can send me an event. People who have me in a circle, but who are not circled by me, can not.” Others say they have been “relentlessly spammed by strangers.” Here’s an example of some really awful event spam. (Notice the spammer had invited Sergey Brin, Larry Page, and Linus Torvalds!) 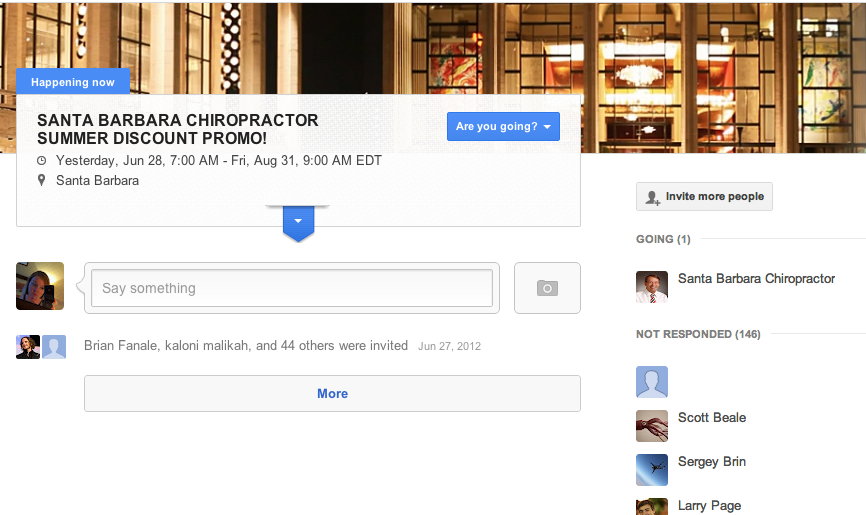 [Update 1 PM ET: We checked with Google on this, given the confusion. A company spokesperson confirmed that all the fixes have now been rolled out. With regard to the Calendar integration, by default, Google+ only put Events on your calendar from people in your Circles. If you decline an event, Google+ also puts this on your Calendar so you can later change your mind. Also, anyone is allowed to invite people to an event, which then results in an email notification. But only if you have that person in a Circle, does it appear on your calendar.]

In the meantime, you can take matters into your own hands. Head into your Calendar settings, and turn “Show event’s you’ve declined” to “No,” then switch the “Automatically add invitations to my calendar” setting from “Yes” to “No, only show events to which I’ve responded.” That will stop the influx until the changes Google is promising roll out to everyone.