It’s no secret that Americans could lose a few pounds. I’m not calling them fat per se, but let’s just say that Hans and Franz are pretty busy these days. In January, GymPact launched a website and iPhone app with the goal of complementing all those newfangled health data trackers, devices, and virtual training apps to incentivize couch potatoes to get up and go to the gym — or yoga, the pool, or spin class.

Today, the TechStars grad is officially announcing that it has raised $850K in seed funding led by Mike Hirshland of Resolute.vc, with contributions from the TEEC Angel Fund, Mike Dornbrook and Alex Rigopolous, the COO and co-founder of Harmonix (better known as the creators of Rock Band and Guitar Hero), Brightcove CTO Bob Mason, and others. As part of the round, TechStars Boston Managing Director Katie Rae will be joining the startup’s board of directors.

The company is also announcing that it has changed its official name from GymPact to Pact, Inc. to better reflect the company’s mission to build an incentives program for a wide range of healthy behaviors, not just those taking place in a gym, co-founder Yifan Zhang tells us. The product, however, will still be known as GymPact, because, hey, puns are fun.

Zhang and co-founder Geoff Oberhofer (who are former classmates at Harvard, where they researched behavioral economics and the ways financial incentives influence our actions) tell us that the fitness platform has incentivized over 250K workouts since launch and has dished out $100K in rewards. Their approach to rewarding exercise, they said, is seeing an 86 percent success rate.

Having secured that early validation, the startup is now focusing aggressively on integrating with running, cycling and other activity tracking apps and devices — with the goal of eventually incentivizing every type of exercise.

Now, some may find it a bit sad that we need financial incentives in order to do our sit ups, but the fact of the matter is that people are busy and there are a million and a half ways life can get in the way of exercise.

So, rather than dishing out badges, points, prizes, or even cash, GymPact believes that the true impetus for healthy behavior (other than peer pressure) is negative motivation. Oh, and also cash. The check-in app works by asking users to create a “Pact,” in which they set a goal for how many times they’ll exercise in a given week, along with the price they’re willing to pay should they fail to meet their goals.

From there, it’s pretty simple: If users meet their goals, they earn cash rewards and, if they don’t, their money goes into a community pot. The startup pays those who fulfill their exercise obligations out of that collective pot, and GymPact takes a transaction fee before it dishes out its cash rewards. (That $100K figure mentioned before is the total amount of rewards handed out after GymPact’s fee.)

Users meet their obligations by checking in at their fitness center of choice, but obviously this introduces the potential for people to game the system with drive-by check-ins. To avoid this, the startup requires people to stay at their workout locations for at least 30 minutes and employs GPS screening that auto-checks users out when they leave the gym. At the end of each week, the startup tallies user attendance and hands out rewards.

At launch, GymPact was only available on the Web and iPhones, but it recently launched its new Android app in private beta and is distributing it to early testers. To clarify, to date the platform’s biggest drawback has been its lack of integrations with fitness tracking apps and devices, but the co-founders said that a slew of integrations are planned for release in August. This could give a huge boost to the startup’s value prop, especially given the recent excitement over health trackers.

After graduating from TechStars Boston, the startup relocated to San Francisco, where it’s busy using its new funding to expand its team and cement those integrations. 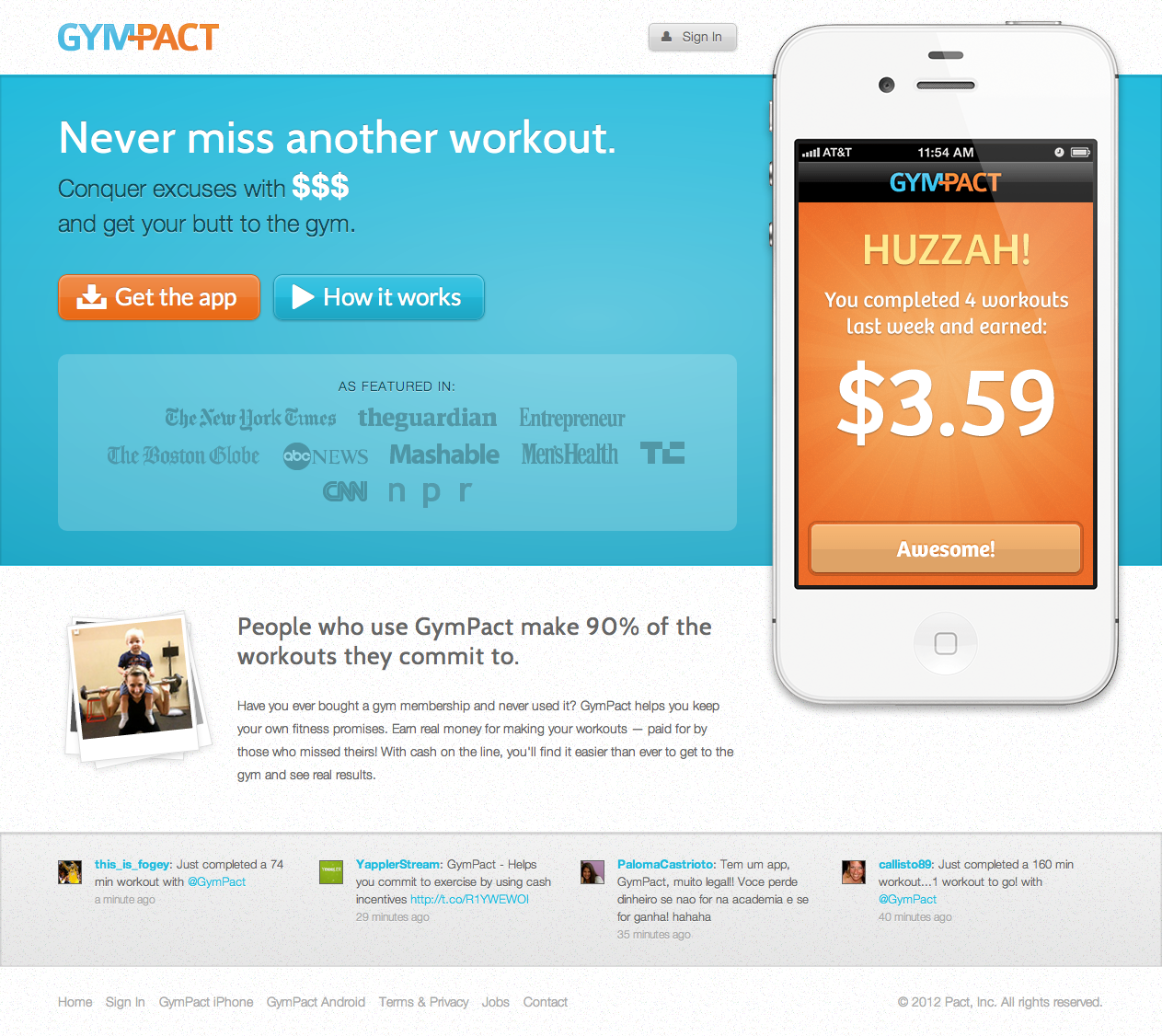