Google+ is obviously a major focus for Google these days, but until now, the company hasn’t really focused on extending the Google platform beyond its own services and its +1 buttons. Now, however, the company is extending the Google+ platform to mobile with the upcoming release of its Google+ SDKs for iOS and Android. This new platform will allow developers to use Google+ sign-in buttons, sharing widgets, and the Google+ history API it quietly launched yesterday. Developers will also be able to pull in public Google+ content through the existing (but limited) Google+ API. In addition to these SDKs, these features are also now available as mobile web optimized social plugins. 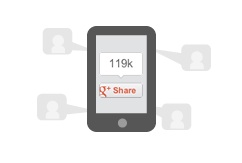 It’s worth noting that the program is launching slowly. The Android version will be available in the coming weeks and on iOS, Google is initially launching the platform in Developer Preview, meaning developers can test and run their apps, but not release them to the public.

As Google announced during its I/O keynote yesterday, “there are now more people that use Google+ from a mobile device than from a desktop computer.” Because Google has always “believed in the importance of mobile for [its] users,” but the company is obviously also interested in establishing a foothold on mobile, where Facebook and Twitter have already established their own presence over the last few years.