Extole is announcing a new version of its marketing platform today. The big new feature: “Social expressions” that integrate with the Facebook Open Graph.

Founder and CEO Brad Klaus says that the new stuff, in particular, taps into a larger marketing trend, where brands are finding new ways to communicate with consumers: “The landscape is shifting from brand-to-consumer to consumer-to-consumer.” That means that the most effective form of promotion isn’t traditional advertising or its online equivalent, but instead turning fans into advocates for the company.

Extole already helps businesses manage social promotions and referrals, such as offering a discount to anyone who refers a certain number of friends to their website. Now those businesses can create special actions that tap into the Facebook Open Graph.

TastingRoom.com has already been using the new feature. When oenophiles visit one of TastingRoom’s wine listings, they’ll see they now have more options than simply “liking” the wine — they can say they “want it”, “tried it”, or “recommend” it. Klaus says it’s not simply a matter of giving fans more verbs to use, because when someone clicks one of those options, they’re also asked to install TastingRoom’s Open Graph app, giving the company more data about potential advocates. And TastingRoom could further promote itself by paying to turn that fan activity into Sponsored Stories.

We’ve already covered tons of Open Graph apps, but now Extole is giving that power to brands and businesses. Any Extole customer an create its own Social Expressions, though the company needs to get Facebook approval before implementing new ones. In addition to TastingRoom, launch partners include T-Mobile, Vogue, Zazzle, Seamless, and Folica. 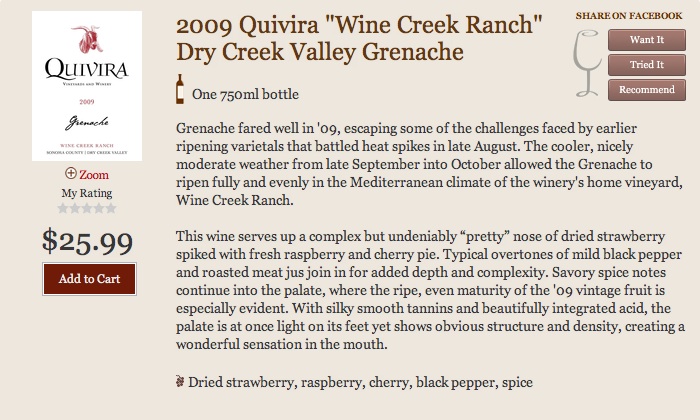