Mobile shopping app shopkick is announcing a partnership with MasterCard today which will allow cardholders to earn “kicks” (shopkicks’ in-app rewards) by linking their card with shopkick’s Buy & Collect program and making qualifying purchases. These kicks can later be redeemed for things like gift cards, music downloads, movie tickets, and other offers.

In addition, in exchange for signing up for the new program, MasterCard cardholders will also receive 250 bonus points for adding a card to shopkick for a limited time during the program’s launch. 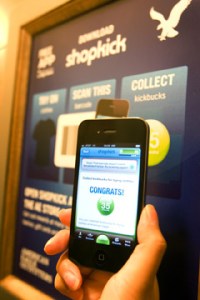 For background, Shopkick’s free mobile app for iPhone or Android rewards consumers for walking into the store, as opposed to a more manual “check in” as with Foursquare. Instead, the app uses proprietary technology which involves in-store hardware that emits an inaudible signal that gets picked up by the shopper’s mobile phone. Shoppers are also rewarded for other actions, like scanning barcodes or trying on clothes, for example. Shopkick’s retail partners include big names like Target, Best Buy, Macy’s, Crate & Barrel, Old Navy, American Eagle, Sports Authority, Toys “R” Us, Simon Malls and others, as well as 40 brands (P&G, Unilever, Kraft, Colgate, Clorox, Disney, HP, Intel).

With the new partnership between shopkick and MasterCard, the goal is to cut down on the popular “showrooming” trend. Birthed by the growth of smartphones and mobile Internet access, “showrooming” sees shoppers treating brick-and-mortar stores as showrooms where they can see, touch and test retail merchandise in real life before proceeding to order it online for a discounted price from Internet retailers like Amazon. Shoppers who link their cards to shopkick will be incentivized to buy in-store instead, with deals like “spend $40 and receive 250 kicks” at retailers including American Eagle Outfitters, Arden B., Crate & Barrel, Old Navy, Toys”R”Us and Wet Seal.

The announcement comes at a time when MasterCard is moving steadily into various m-commerce initiatives, which includes things like its newly announced digital wallet plans via PayPass Wallet Services, for example. The company also announced a deals service of its own back in April, but instead of rewarding consumers for shopping in-store, the program was more of a response to Groupon and LivingSocial in that it was focused on geo-targeted local offers.

Shopkick’s mobile app will be updated today with support for the new program, the company says, but we’re not seeing it here yet (at time of publication) on iPhone.

Update 2 2:30 PM ET: MasterCard issued a correction to its original announcement. Initially, they said users would receive 250 kicks per card. It is per user.

Update 3: Visa emailed to point out they’ve been doing this forever. Anyone else emailing me about this post will now be filtered to spam.