Today at Google I/O, Google announced it has 250 million total users, 150 million monthly users, and 75 million daily users, with more usage from mobile than desktop. It released an Android tablet version too, and an iPad version is coming soon. Both as well as Google+ for Android smartphones offer brand new navigation, a new ribbon bar, new notifications, and brand new profiles.

This month is Google+’s one year birthday, and Vic Gundrota rattled off stats in hopes of convincing the world of its momentum. He said 50% of monthly users (150 million) sign in every day, so that means 75 million DAU. Sure that’s only around 15% of what Facebook has, but not bad.

Google+ active users spend over 60 minutes a day across Google products, and 12 minutes per day in the Google+ stream. Even if these are just highly engaged early-adopters, many of which might be Google fanboys, that’s a pretty stunning total of 360 minutes per month. For comparison, the average Facebook user spends 441 minutes per month on that social network.

[Update: It’s important to remember that Google has some weird ways of calculating stats, so some of these “active users” could be people engaging with social features on other Google properties, or just clicking +1 buttons.]

Today, Google+ for Android tablets becomes available, and the iPad version is due “very soon”. The app is visually sorted, so posts with more engagement are bigger, and you scroll sideways to browse content. There’s a new lean back experience for Hangouts on tablet, and text and buttons have been made crisper and easier to tap.

While Facebook’s iPad app is essentially a blown up version of its iPhone app with slightly better cascading navigation, Google really tried to do something new with the added screen space. Rather than a static feed where every post is basically the same size, Google uses the popularity signals from your network to make sure you see content others have enjoyed. 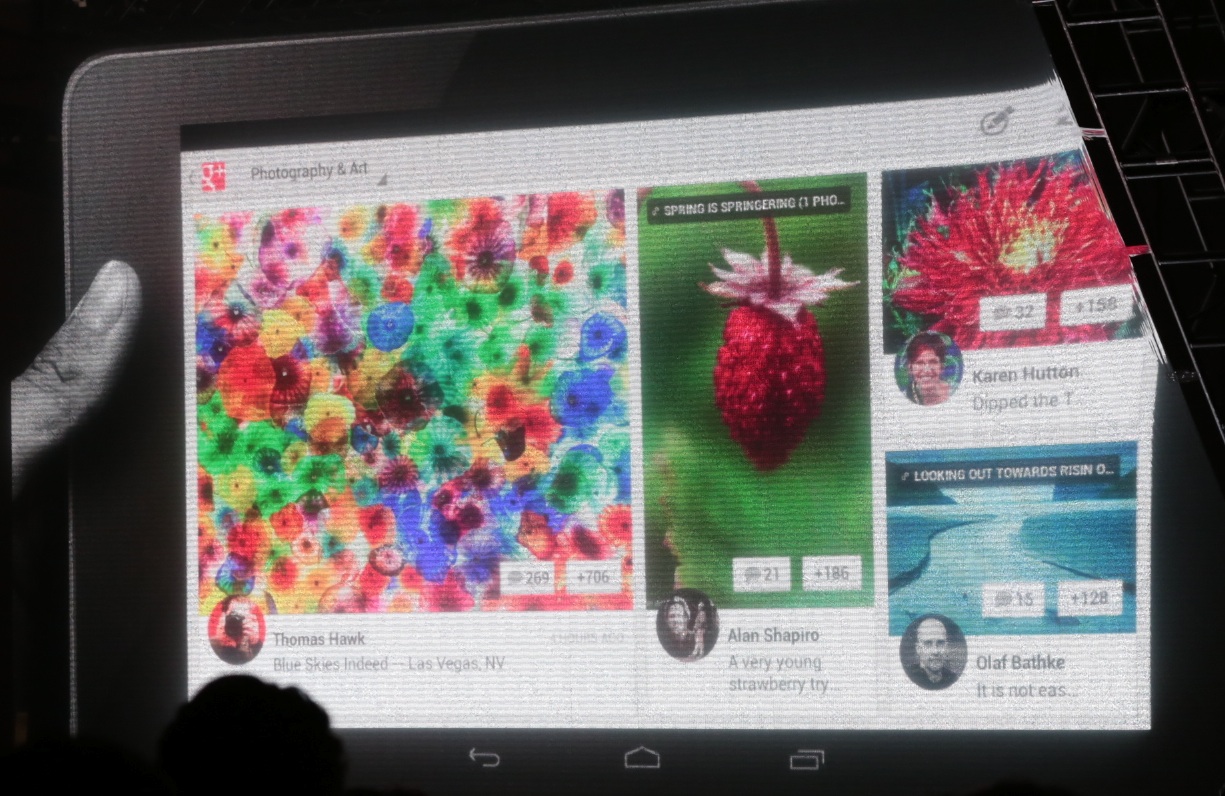 Google+ also got some updates in Android’s new 4.1 Jelly Bean OS. You can +1 or share posts with your Circles straight from Android notifications, without opening the app.

The new Google+ Events is “for before, during and after your party.” It comes with two dozen “cinemagraphic themes” aka animated invites that fold and move to show pictures to your potential guests. You can invite anyone, even if they’re not Google+ users, by using their email address. Your Events are also featured on your Google Calendar with a photo of the host so you don’t miss them, and fold out invites so you can enjoy the cinemagraphs. 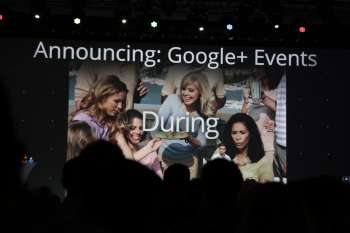 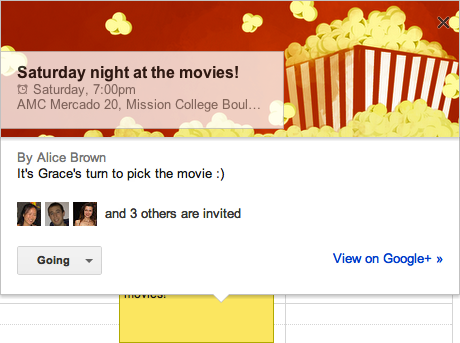 There’s also “Party Mode” for once an event starts. After being enabled on your mobile device, all new photos you shoot get automatically uploaded to the Event page in real-time.

To make sure you don’t forget you’re auto-posting photos, a green icon is shown atop your mobile screen which can be dragged open to turn Party Mode off. If you want to show off the Party Mode stream, you display a real-time slideshow of photos from your Event page.

Party Mode essentially takes the best part of defunct photos app Color, namely the ability to see all the photos being taken at a certain place, and creates a centralized Event page for viewing them.

Vic Gundotra explained how after a party, Event guests will be emailed to upload photos. They’re then combined with Party Mode photos and Google collates them in chronological order in one place you can browse. Those with the most engagement are highlighted on a special page, and you can sort and filter posts by who’s in them or who published them.

Google will test out Events and Party Mode at an after-hours party tonight with musical artists Paul Oakenfold and Train. 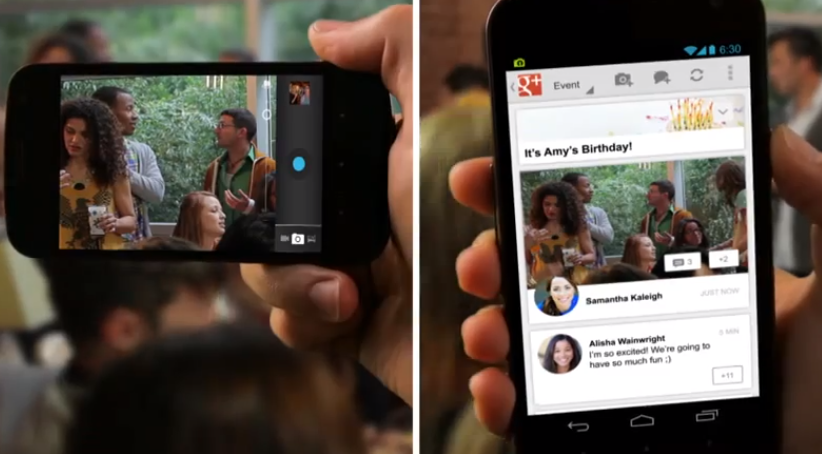 Events looks awesome, and along with Hangouts could become one of the big talking points for Google+. The product makes Facebook Events, which hasn’t gotten any significant new features in years, look quite outdated. Facebook should take a cue and think about how it can more closely knit the real-time, in-party mobile experience with Events the way Google has. 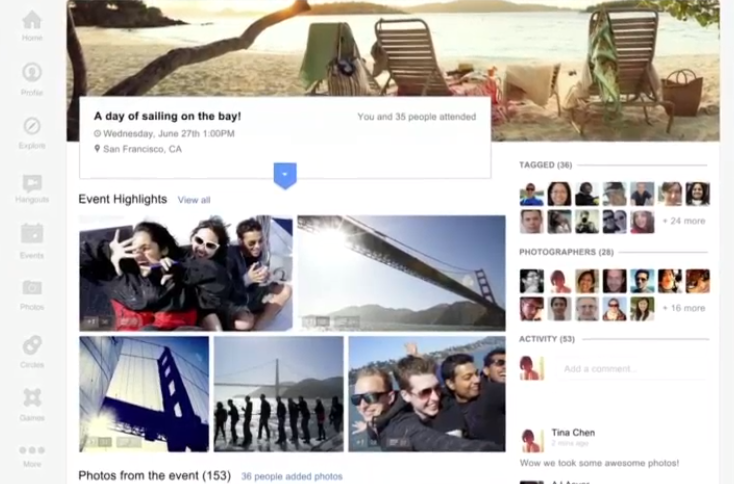 The Google+ platform has had a tough month before today, with Electronic Arts and Wooga pulling games from its platform to dedicate resources where there are more users. Meanwhile, Airtime launched a video chat network that could steal share from Google+ Hangouts.

On the other hand, its mobile apps recently got a gorgeous update, and alongside today’s tablet announcements, Google+ is now much more visually advanced than Facebook and Twitter on the go.

With today’s growth stats and new interfaces, maybe people will finally stop calling it a ghost town. In fact, with Events, Google+ could become a party if it can just convince users they need another social network.