Klip is one of those mobile video-sharing apps — you know, the ones that let you take a video with your phone and upload it to an app to share it with people who have the app. And then, if it’s really awesome you share with other people, like on Facebook and Twitter. There’s a lot of ’em right now, with Socialcam and Viddy tops among them — at least on iOS. But no one’s really offering the same functionality on Android, which is why Klip is really excited about its latest release, which brings its app to users of Android mobile phones.

Launched last September, Klip’s iOS app has done pretty well, attracting millions of downloads. But the number one request among users was to make the app available for Android, so that its existing users could share videos with their friends. The Klip Android app, which goes live today, will bring in all the features that the startup’s iPhone users enjoy and make them available to those with Samsung and HTC and Motorola-type devices.

It offers up the ability to share your videos with friends on the app, tweet them out or put them on your Facebook wall. But it’s also about connecting with the community, following — and being followed — by people you don’t necessarily know, and publishing videos out to the broader group. The new app allows Klip users to preview videos on the device before posting them, as well as being able to scrub through videos and see preview thumbnails. 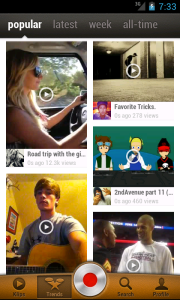 Klip developed the app not just because getting it on Android devices opens up a huge new market, but because it hopes to take advantage of a number of Android features not available for the iPhone. That includes, among other things, more processing power, larger displays, and LTE connectivity. All of that means higher-quality graphics, as Klip took advantage of a 50 percent increase in the number of pixels for its Android app and increased thumbnail size accordingly.

The Klip app works on Android versions 2.3 (Gingerbread) and above, meaning it can be used on more than 70 percent of Android mobile phones. Meanwhile, competitors are still working on getting their own video apps on Android. In fact, Android has a dearth of video production or editing apps in general. One reason for that — or so I’ve heard from mobile developers — is that unlike iOS, which has integrated video processing built in, the Android ecosystem is a hodgepodge of different manufacturers and device capabilities with no good way to power video manipulation. Klip gets around this because it does all its video rendering in the cloud.

Klip has raised a total of $10 million since its founding, with Benchmark Capital, Matrix Partners and founder Alain Rossmann putting money in. The company has fewer than 20 employees, including personnel from Google, YouTube, Yahoo, and Apple.